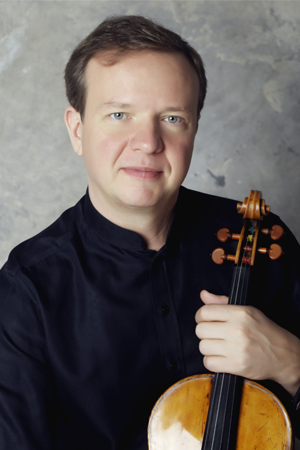 Yuri Afonkin was born in Leningrad in 1978. In 2002 he graduated from the St&nbs;Petersburg Conservatory (class of Professor Vladimir Stopichev). From 1996 to 1999 he was a soloist with the St Petersburg Academic Glinka Capella Orchestra. Since 2000 he has been Principal Viola of the Mariinsky Orchestra. In 2008 he was named Honoured Artist of Russia.

At the Mariinsky he performs orchestra solos in the operas and ballets as well as in symphonic concerts, also playing recitals and chamber concerts and participating at the festivals and concert tours of the theatre. Yuri Afonkin appeared as soloist with the Mariinsky Orchestra, Glinka Cappella Orchestra, Russian State Academic Symphony Orchestra “Evgeny Svetlanov”, Munich Philharmonic Chamber Orchestra, collaborated with the conductors including Valery Gergiev, Christian Knapp, Nikolaj Znajder, Alexander Tchernushenko. He plays chamber music with Rudolph Buchbinder, Wilfried Strehle, Lorenz Nasturica-Herschcowici, Sofia Kiprskaya. He played at the Carnegie Hall, Philharmonie Gasteig München, in France, Finland, participating in the Stars of the White Nights Festival, Mikkeli Festival and other festivals. His vaste repertoire embraces solo works from the 17th century to the contemporary music, including the major viola opus, Hector Berlioz’s symphony Harold en Italie. Afonkin was the first to perform Rodion Shchedrin’s Concerto dolce in St Petersburg.