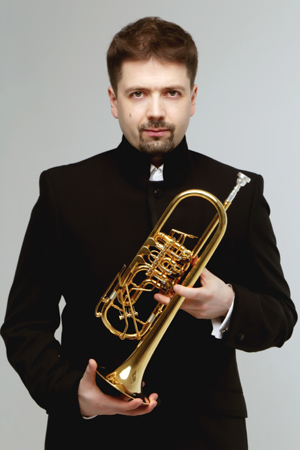 Timur Martynov was born in 1979 to a family of musicians. At the age of eight he started to study trumpet with Georgy Kaminsky and continued his studies at the St. Petersburg Conservatory with Prof. Yuri Bolshiyanov, later getting the internship at the Luxemburg Conservatory of Music, where he studied with Malte Burba, Jouko Harjanne, Charles Consbruck and Roman Zaremba. Diploma receiver of the Prague Spring International Competition (Czech Republic), prize-winner of the Maurice André competition (France), the International Raimo Sarmas Competition (Finland) and other.

During his career Timur has given performances at many prestigious venues around the world and participated in various festivals like BBC Proms (Great Britain), Salzburg Music Festival (Austria), Beethoven Festival (Germany), Diaghilev Festival, Stars of the White Nights and the Moscow Easter Festival (Russia). In 2010 at the BBC Proms he performed solo trumpet part in Mahler’s Fifth Symphony with the World Orchestra for Peace.

Timur Martynov gives master-classes in Russia and abroad and since 2019 has been teaching at the St. Petersburg Conservatory and at the Special music school of the conservatory.

From 2018 Timur Martynov is the Schagerl Artist.