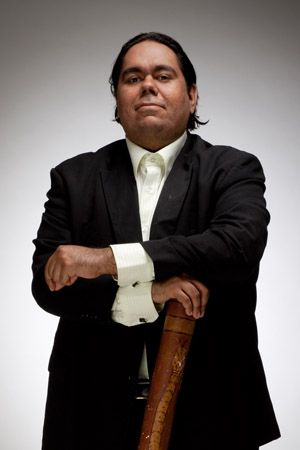 William Barton is widely recognised as one of Australia’s leading didgeridoo players and composers, and is a powerful advocate for the wider perception of his cultural traditions. Born in Mount Isa, William Barton was taught to play the didgeridoo by his uncle Arthur, an elder of the Waanyi, Lardil and Kalkadunga tribes of north western Queensland. William Barton’s musical journey began at an early age, listening to music sung by his mother Delmae and his father Alfred, leading into his first tour at age fifteen, travelling to the USA, Canada and Hawaii with the Doonooch Dance Company from New South Wales. William Barton performed his first classical concert with the Queensland Symphony Orchestra at seventeen years of age with a world premiere didgeridoo concerto by Philip Bračanin.

Barton’s debut performance of Australian composer Peter Sculthorpe’s music took place with the Goldner String Quartet at the Australian Festival of Chamber Music in 2001. Sculthorpe’s Requiem (2004) was written for William Barton as the soloist and was premiered by the Adelaide Symphony Orchestra, later being performed at the UK’s Lichfield Festival under Jeffrey Skidmore. William Barton’s subsequent collaborations with Sculthorpe have been pivotal to his early career in the classical realm, adding the didgeridoo to major works and leading to a 2004 ARIA award nomination. In 2005 William Barton performed Earth Cry with the London Philharmonic, conducted by Alexander Briger who in 2011 invited William Barton to perform with the Australian World Orchestra conducted by Simone Young and Briger, and the same year was a soloist for the YouTube Symphony. Other composers of note include Ross Edwards, Sean O’Boyle, Liza Lim and Matthew Hindson.

In 2012 William Barton won “Best Classical Album” for his Kalkadungu album. Consequently he also received two Honorary Doctorates of Music from Griffith University Queensland and the University of Sydney (Australia) for his work in the music industry, a career that spans more than fifteen years.

Composing credits include works for the Berliner Philharmoniker, the Sydney Symphony and the 2008 Beijing Olympics Opening Ceremony. Has undertaken European tours with the Australian Youth Orchestra, the Australian Chamber Orchestra and other ensembles including the Southern Cross Soloist, Topology, Queensland Ballet and contemporary dance company Leigh Warren and Dancers. Appeared in Songs of the Mother Country conducted by Roland Peelman for the Queensland Biennial Festival of Music in Mackay and Journey of the Rivers, performed at the Pompidou Centre in Paris in 2006.

William Barton has performed at Gallipoli (Turkey) to commemorate the ninetieth, ninety-ninth and one-hundredth anniversaries of the ANZAC Day landing and in Belgium for the ninetieth anniversary of the Battle of Passchendaele. In May 2015 William Barton featured in the opening ceremony for the Australia Pavilion for the Venice Biennale (Italy).