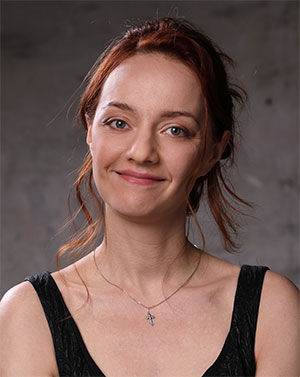 Last year she won 1st prize, the audience prize and the Mozart Prize at the Géza Anda Competition in Zurich, and her Mozart playing is indeed characterised by a highly tasteful, lively sense of articulation, copious subtle shades of colour and above all a lovely understanding for the inner life of this music.
Neue Zürcher Zeitung

Varvara displayed grandiose colouristic riches in the Romeo and Juliet (Op. 75) by Prokofiev that crowned her programme. She never let it turn into a sensationalist parade of individual numbers, instead allowing us to experience it as a seamless, thrilling narration at the piano.
But without the wonderful little Mozartian farewell by this sympathetically modest Russian, we would have missed an important little piece of the jigsaw on this morning in Schwetzingen.
Rhein-Neckar-Zeitung

In addition to all her stage presence, Varvara’s greatness lies in her modesty, paired as it is with a brilliant technique and an exemplary “full body” approach to her pianistic touch. Her playing is always mellow and flexible, and incredibly smooth even in her fortissimo. When Varvara plays, you hear new lines of melody, new emphases and new connections. Music of this quality becomes an epiphany, an emotional roller-coaster into which Varvara entices her audience – in her own modest, wonderful, brilliant way.
Krone Innsbruck

Varvara Nepomnyashchaya was born in Moscow in 1983. In 2007 she graduated from the Tchaikovsky Moscow State Conservatory (piano class of Mikhail Voskresensky, also studying in the chamber ensemble class of Alexander Bonduriansky). From 2011 to 2013 she studied at the Hochschule für Musik und Theater Hamburg under the tuition of Evgeni Koroliov. She went on to study under Vladimir Krainev, Karl-Heinz Kämmerling, Dmitri Bashkirov and Andrzej Jasiński.

Prize-winner at the International Johann Sebastian Bach Competition Leipzig (2006; 2nd prize), the Nagoya International Music Competition (Japan, 2008; 2nd prize), the European Piano Competition Bremen (2009; 3rd prize) and the Prague Spring festival (2011; 3rd prize) among others. In 2012 she was awarded 1st prize at the Concours Géza Anda in Zurich; moreover, the jury also awarded her the special prize for the best performance of a concerto by Mozart, and for her performance of Beethoven’s Piano Concerto No. 3 she received the audience award.

Appears with the Mariinsky Orchestra, the Wiener Kammerorchester, the Tonhalle Orchester Zürich, the Orchestre National de Lille, the Hungarian Radio Symphony Orchestra and the Tchaikovsky Symphony Orchestra among other ensembles. Collaborates with such conductors as Valery Gergiev, Vladimir Fedoseyev, Eliahu Inbal, David Zinman and Cornelius Meister.