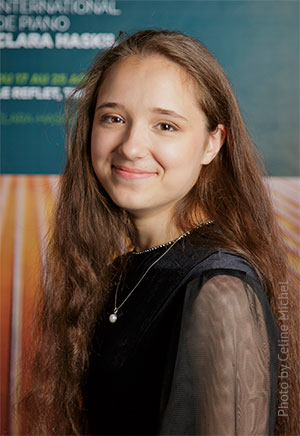 Elizaveta Ukrainskaia was born in 1996 in Offenbach am Main (Germany). Graduate of the Middle Special School of Music of the St Petersburg State Rimsky-Korsakov Conservatory (class of Lyubov Rudova). She is currently a student at the conservatory itself (class of Alexander Sandler). Has taken part in master-classes conducted by Arie Vardi.

In 2008 and 2009 she was awarded the City of St Petersburg Government Prize Young Talents. In 2005 she became a grant-recipient of the St Petersburg Philharmonic Society, followed in 2010 by a grant from the Talented Youth of Russia project of the Russky Standart bank’s Charitable Foundation. In 2014 she received the Yuri Temirkanov Prize.

Appears as a soloist in cities throughout Russia and internationally. Engagements for the 2019–2020 season include concerts in the English Hall of the St Petersburg House of Music, the Volgograd Philharmonic and the Nizhny Novgorod State Philharmonic.
Information for December 2019