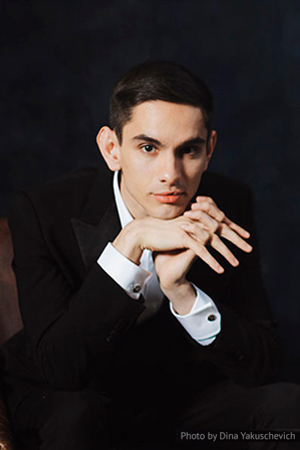 Dmitry Shishkin has played the piano since the age of two. At the age of four he entered the Special Children’s School of Arts of the South Ural Tchaikovsky Institute of the Arts. At the age of nine he began to study at the Moscow Middle Special School of Music (class of Mikhail Khokhlov). Graduated from the Moscow State Tchaikovsky Conservatoire (class of Eliso Virsaladze). He is currently studying under Epifanio Comis at the Istituto Musicale Vincenzo Bellini in Catania (Italy).

Has appeared at the Summer Festival in Dubrovnik, the Bergen International Festival, the Festival Pianistico Internazionale di Brescia e Bergamo and the Chopin and His Europe international festival.

Engagements for the 2019–20 season include tours to South Africa, Japan (with the Tokyo Symphony Orchestra), Singapore, Taiwan and Hong Kong as well as concerts in Vienna, Munich, Paris, Freiburg, Warsaw and Abu Dhabi.
Information for September 2019