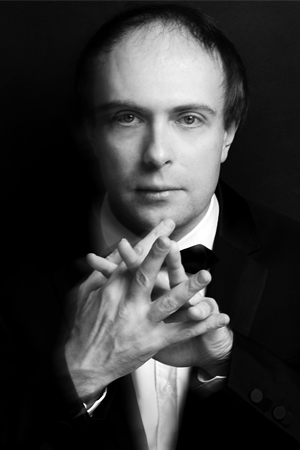 Daniil Sayamov was born to a family of musicians in Rostov-on-Don in 1983. At the age of fifteen he graduated from the Music School of the Rostov State Rachmaninoff Conservatoire (class of Sergei Osipenko, student of Lev Oborin) and entered the conservatoire itself. A year later, he won the International Rachmaninoff Competition of Young Pianists in Tambov and received an invitation to study at the Tchaikovsky Moscow State Conservatory from Vera Gosnostayeva. He received the Sviatoslav Richter Grant provided by the Mstislav Rostropovich Foundation while he was studying at the conservatory. After completing his post-graduate studies, Sayamov continued his studies at London’s Royal College of Music under Dmitri Alexeev. He earned his Master of Performance degree with distinction at the college in 2011. In 2014 Sayamov began teaching at the Moscow Conservatory as Vera Gornostayeva’s assistant. He continued to work with her students after the great pianist’s death (2015).

In December 2018 he presented the Russian premiere of Magnus Lindberg’s Second Piano Concerto at the Mariinsky International Piano Festival at the Concert Hall of the Mariinsky Theatre.

The pianist has toured in the USA, Great Britain, Canada, Israel, Germany, Japan, South Korea, Austria, the Netherlands, Switzerland, Spain, Italy, Estonia, Latvia, Kazakhstan and Azerbaijan. He has taken part in such festivals as the Ars Longa festival in Moscow and the Stars at the Rhine festival in Basel, as well as the annual music festival Vera’s Baton in memory of Vera Gornostayeva. The pianist’s recordings are streamed on NPO Radio 4 (Netherlands) and Celtic Music Radio (Scotland).
Information for May 2021