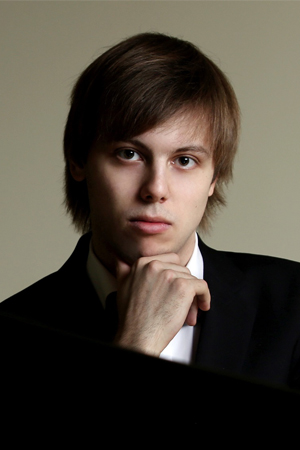 Timofei Dolya was born in 1993 in Moscow. Graduated from the Central School of Music of the Moscow State Tchaikovsky Conservatory (class of Andrei Pisarev) and the Moscow Conservatory itself, where he also completed an assistant-traineeship in the class of the same teacher. He is currently an assistant trainee at the Universität für Musik und Darstellende Kunst Wien (class of Jan Jiracek von Arnim). Has also studied at the Aspen Music Festival and School (2014) and the Conservatorio Statale di Musica “Gioachino Rossini” in Pesaro (2016).

Engagements for the 2019–2020 season include concerts at the White Hall of the St Petersburg Peter the Great Polytechnic University, the Volgograd State Serebryakov Conservatory and the Brucknerhaus in Linz (Austria) among other venues throughout Russia and internationally.

Has collaborated with the recording companies KNS Classical and EMCY. June 2017 saw the release of Timofei Dolya’s debut disc, featuring a recording of works by Schubert and Prokofiev (KNS Classical).
Information for December 2019