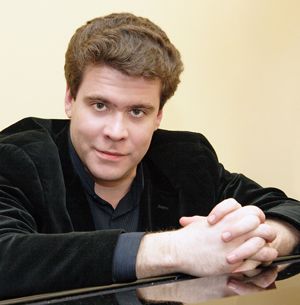 Denis Matsuev was born in 1975 in Irkutsk. Graduated from the Tchaikovsky Moscow State Conservatory. In 1998 was the winner of the International Tchaikovsky Competition in Moscow, following which he began to tour actively throughout the world and perform with renowned symphony orchestras.

Matsuev considers his main priority to be the development of philharmonic music in Russia’s regions – and it is in Russia that he presents a significant proportion of his concert programmes, most frequently premieres. Since 1995 he has been a soloist with the Moscow Philharmonic Society, where since 2004 he has presented his personal subscription Soloist – Denis Matsuev. Appears in a trio with percussionist Alexander Zinger and double bass player Andrei Ivanov.

In 2004 he signed a contract with the company BMG. The pianist’s first project together with the company – the solo album Tribute to Horowitz – received the Record prize in 2005. His discography also includes the disc Unknown Rachmaninoff, recorded on that composer’s piano at the Villa Senar in Lucerne (2007), the albums Denis Matsuev: The Carnegie Hall Concert (Sony, 2008), Matsuev. Liszt (RCA Red Seal, 2011), a recording of works by Shostakovich and Shchedrin (Mariinsky, 2012), Rachmaninoff’s Second Piano Concerto and Gershwin’s Rhapsody in Blue (2013), Szymanowski’s Third and Fourth Symphonies (2013). In 2014 his recording of Tchaikovsky’s First and Second Piano Concerti was named “Album of the Month” by Gramophone magazine. In 2018 the Mariinsky label released a recording of concerti by Prokofiev and Rachmaninoff.

Member of the Council for Culture and Arts of the President of the Russian Federation. Recipient of the Shostakovich Prize (2009), the State Prize of Russia (2009) and the Russian Federation Government Prize (2017). UNESCO Goodwill Ambassador and recipient of the Order of Honour of the Russian Federation. In 2019 he was awarded the Lev Nikolaev Gold Medal “for a significant contribution to enlightenment and the popularisation of the achievements in science and culture”. In 2021 Denis Matsuev won the International Classical Music Award (ICMA) in the category “Video Performance” (he is the first Russian prize-winner in this category) for a Rachmaninoff programme played with the Orchestre du Festival de Lucerne under the baton of Riccardo Chailly.
Information for November 2022