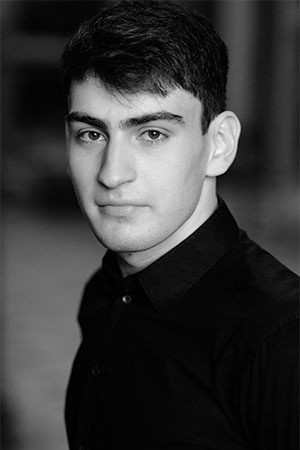 Abisal Gergiev was born in St Petersburg in 2000. Began to study music at the age of four. In 2019 he graduated from the Secondary Special Music School of the Rimsky-Korsakov St Petersburg State Conservatory (class of Alexander Sandler). Is currently a student at New England Conservatory in Boston (class of Wha Kyung Byun).

First appeared with the Mariinsky Orchestra under the baton of Valery Gergiev at the opening of the State Philharmonic of the Republic of North Ossetia–Alania in 2016. Has appeared at the Mariinsky Theatre’s International Piano Festival. Has performed at the Musical Theater Basel. In 2018 he opened the Mikkeli Music Festival (Finland) with a recital. Has appeared as an accompanist at concert halls in St Petersburg and Moscow. Has taken part in performances of chamber music by Mozart, Beethoven, Schumann and Bruch. Has collaborated with the conductors Zaurbek Gugkaev and Artyom Markin.
Information for July 2020