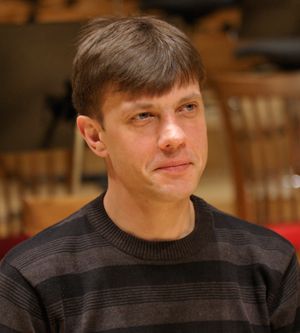 Andrei Khotin graduated from the St Petersburg State Rimsky-Korsakov Conservatoire in 1995 (class of Professor Anatoly Ivanov); since 1997 he has worked with the Mariinsky Orchestra and since 2003 he has been a soloist in the percussion section. In 2008 he was awarded the title Honoured Artist of Russia. The musician performs solo timpani in the operas Götterdämmerung and A Christmas Tale and the ballet Le Sacre du printemps among other productions as well as orchestral works including symphonies by Beethoven, Prokofiev and Shostakovich; tours abroad with the theatre and features on recordings on the Mariinsky label. Together with orchestra colleagues – brass and percussion sections – Andrei Khotin appears in concert programmes. He featured in the festivals Brass Evenings at the Mariinsky (2008–2010) and Percussion for Maslenitsa (2014). As well as performing, he conducts master-classes for young musicians, and in 2016 he headed the jury of the II All-Russian Music Competition in the category "percussion instruments".