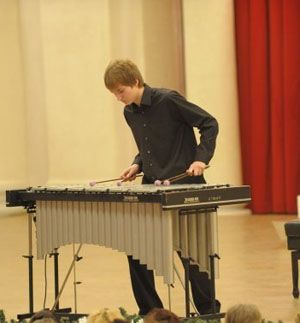 Fyodor Khandrikov was born in 1992 in Saint Petresburg.
In 2007 he entered the St Petersburg Rimsky-Korsakov College of Music (class of Pavel Krichashvili). In 2009 he took part in the Bayreuth Festival of Young Artists. During the festival, he attended master-classes given by Sanja Fister (the Hochschule für Musik Hanns Eisler) and Srđan Palačković (the Belgrade Philharmonic Orchestra) in addition to performing in a brass ensemble under the baton of Edgar Manyak and with the festival’s combined orchestra under the baton of Patrick Lange.
In 2011 he entered the St Petersburg State Rimsky-Korsakov Conservatoire (class of Alexander Mikhailov). In March 2012 he began to appear with the St Petersburg Percussion Group. In May 2012 he was invited to join the percussion section of the Mariinsky Theatre Symphony Orchestra.