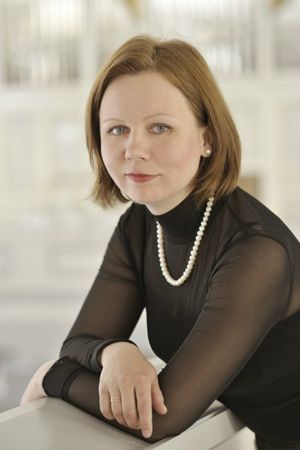 Marina Väisä was born in Leningrad. She graduated from the Rimsky-Korsakov St Petersburg State Conservatory in 2004, specialising in organ (class of Tatiana Chausova) and harpsichord (class of Ivan Rozanov), and in 2005 she graduated from the Sibelius Academy in Helsinki, specialising in organ (class of Olli Porthan). Also undertook a postgraduate study at the St Petersburg Conservatory.

Has taken part in masterclasses given by Ludger Lohmann, Jon Laukvik, Wolfgang Zerer, Pieter van Dijk and Lorenzo Ghielmi. As a grant-recipient of the Gartow Stiftung she continued to study at the Staatliche Hochschule für Musik und Darstellende Kunst Stuttgart under Ludger Lohmann.

In 1991–2013 she was organist Chorus Director at the St George Evangelical Lutheran Church in Koltushi (Leningrad Region). Since 2009 she has been Principal Organist of the St Petersburg Cathedral of St Mary. In 2010 the Finnish company Martti Porthan undertook work to install a neo-baroque organ in the cathedral.

Marina Väisä took part in a commission to develop its design and was the curator responsible for the instrument’s installation. As head organist of the cathedral she organises concerts that are open to all. On two occasions she has received the special prize at the Mikael Tariverdiev International Organ Competition. As a prize-winner at the competition she undertook a recital tour to Great Britain.

She has toured in Finland, Estonia, Sweden, Great Britain, Germany, Switzerland and China as a soloist and a chamber musician and has performed at the Concert Hall of the Mariinsky Theatre.

In 2012 together with mezzo-soprano Elena Yeremeyeva she released the audio recording Baroque Music for Mezzo-Soprano and Organ. In 2018 she released a CD To the Glory of God Alone with compositions by Bach and Evangelical Lutheran Church chants.
Information for September 2021