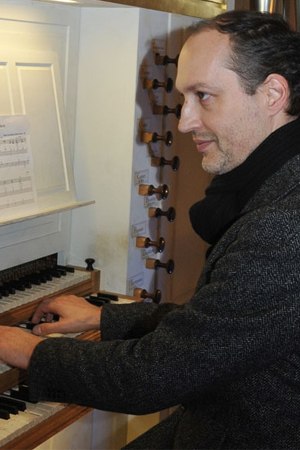 Compositional integrity, technically complex and yet accessible musical language, stylistic unity, careful treatment of quoted material and attentiveness to the sound possibilities of the instrumental structure – these are the main features of this composer’s art.
Moskovsky Muzykalny Vestnik (Moscow Music Herald), 2000

Leonid Karev was born in 1969 in Moscow. He graduated from the Tchaikovsky Moscow State Conservatory, where he studied organ under Natalia Gureyeva, composition under Konstantin Batashov, orchestration under Yuri Butsko. From 1992 Leonid Karev continued his studies at the Conservatoire de Paris and the Conservatoire de Boulogne under Alain Bancquart and Michel Merlet for composition and under Michel Chapuis, André Isoir and Jean Guillou for organ; trained at the Muraltengut in Zurich and the École Normale de Musique de Paris.

Karev is currently the organist at the Church of the Assumption of the Virgin in Paris and a professor at the Conservatoire de Paris.
Information for February 2021