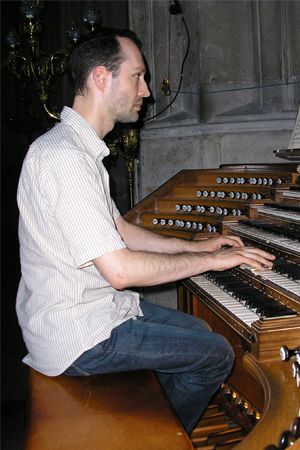 Leonid Karev graduated from the Moscow State Tchaikovsky Conservatoire, where he studied organ and piano under Natalia Gureyeva, composition under Konstantin Batashov, orchestration under Yuri Butsko. Since 1992 Leonid Karev has continued his studies in France under Alain Bancquart Michel Merlet (composition) and Michel Chapuis, André Isoir and Jean Guillou (organ at the Paris and Boulogne Conservatoires) as well as at the École Normale de Musique de Paris. His symphony Dulce Memoriae was awarded Sacem prize and a prize at the Gino Contilli competition in Italy and his piece for choir Ave Maria was awarded at the Guido d’Arezzo competition in Italy. He is also the 1st prize winner of Marcel Dupré organ competition in Chartres (1998), and the 1st prize of honor winner of the UFAM in Paris (1996).

Karev’s works as a composer include Dulce memoriae for symphony orchestra, Mots interrompus for organ and symphony orchestra, La Chanson des Pierres for narrator and orchestra, sonatas for organ, two pianos, violin and piano as well as numerous other pieces for various instruments. In 2015, in Piacenza there was a premiere of his Three Religious Sonnets for the reader, organ and ensemble. Composer’s latest works include the opera L'affaire Eurêka for soprano, mezzo-soprano and piano, which will premiere in 2018 at the festival in Avignon, and a poem for the choir and orchestra Die Engel to verse by Rilke.

Engagements for the 2017–2018 season include concerts in Paris, Rosny-sous-Bois, Sanse, Épineau-les-Voves and other cities in France and an appearance at the Organ Festival in Brunoy.

Karev is currently the organist at the Church of the Assumption of the Virgin in Paris and a professor at the Conservatoires of Paris.
Information for December 2017