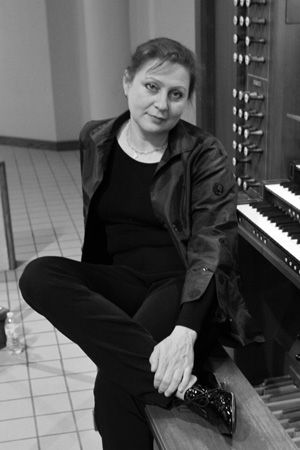 Has given concerts in Kazan, Moscow, St Petersburg, cities in the Volga region, the Urals and Siberia as well as in Armenia, Georgia, Azerbaijan, Ukraine, Kazakhstan, Great Britain, Germany, France, Switzerland, Poland, Norway, Japan and the USA. Has taken part in the festivals Jazz on the Big Organ and Frau Organ in Chelyabinsk, the Mariinsky Theatre's International Organ Festival and the Moscow Easter Festival. In 2011 she performed at the Church of Norway in Longyearbyen (Spitsbergen Island). Creator, performer and director of the subscription series Universal Bach, Known and Unknown Masterpieces, Not Just Johann Sebastain Bach, Organ Skills, An Organ Map of Europe and Tales of the Organ Kingdom at the Salikh Saidashev State Grand Concert Hall in Kazan. Since 2009 she has been Art Director of the Saidashev State Grand Concert Hall in Kazan, and since 2013 she has been Artistic Director of the international religious music festival Music of Faith in Kazan. In 2015 she was the Secretary General of the International Mikael Tariverdiev Organ Competition.

Has recorded on CD, federal and republican radio and TV. Her repertoire includes works from different eras and styles from baroque to jazz and contemporart avant-garde as well as all of the organ music of Mikael Tariverdiev.
Information for October 2018