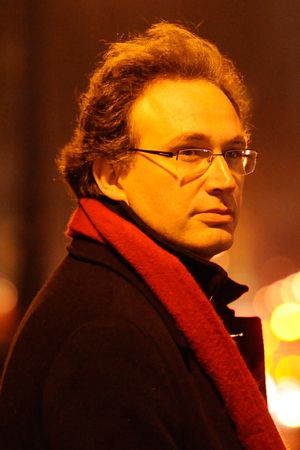 Thierry Escaich was born in 1965 in Nogent-sur-Marne (France). He studied at the Conservatoire national supérieur de musique et de danse de Paris, where he has taught classes in improvisation and composition since 1992. In 1997 he became the titular organist at Paris’ Église Saint-Étienne-du-Mont, succeeding Maurice Duruflé.

Escaich composes in many genres and forms and his catalogue includes over 100 works, such as Chaconne for orchestra, oratorio Le Dernier Évangile and a double concerto for violin and cello, Miroir d’ombres. His first opera Claude, to a libretto by Robert Badinter after Victor Hugo’s Claude Gueux, was premiered at the Opéra de Lyon in March 2013 to great acclaim. His most recent works include a viola concerto, La Nuit des chants, for Antoine Tamestit and the organ concerto Quatre Visages du temps which received its European premiere by Escaich and the Orchestre National de Lyon in November 2017. In June 2019 the world premiere of Escaich’s Vers l’esprit for organ was performed by Henri-Franck Beaupérin at the Abbaye de Sylvanès.

Thierry Escaich’s works are performed by leading orchestras in Europe and North America and by renowned musicians such as Lisa Batiashvili and François Leleux, Valery Gergiev, Paavo Järvi, Alan Gilbert, Alain Altinoglu, Louis Langrée, Renaud and Gautier Capuçon, Emmanuelle Bertrand and Paul Meyer. Escaich has been Composer in Residence with the Orchestre National de Lyon, the Orchestre National de Lille and the Paris Chamber Orchestra and his music has been honoured by four Victoires de la musique awards (2003, 2006, 2011 and 2017).

In 2013 he became a member of the Académie des Beaux-Arts in Paris; in 2018 he was the featured composer at the Radio France Festival Présences in Paris.

Works for organ are an important feature of Escaich’s music and they are performed by organists around the world, including solo and chamber works, three concerti and the symphonic poem La Barque solaire for organ and orchestra.

Thierry Escaich’s career as a composer is closely linked to his career as an organist. He appears in recitals internationally, combining repertoire pieces with his own compositions and improvisations. His passion for cinema has led him to perform “cine-concerts”, improvised accompaniments on both the organ and piano for silent films such as Phantom of the Opera and Metropolis.

Many of Escaich’s works have been recorded by Accord/Universal. Most recently, the disc Baroque Song was released on Sony Classical to critical acclaim. His 2011 release Les Nuits hallucinées crowned his residence with the Orchestre National de Lyon, and received numerous distinctions, including a Choc de l’année from Classica magazine as an outstanding release of the year. The first production of Claude was released on DVD (BelAir Classiques).

In the 2020–21 season the musician was the Organist in Residence at the Dresdner Philharmonie.

Thierry Escaich collaborates closely with the Mariinsky Theatre; since 2015 he has been Artistic Director of the International Organ Festival Mariinsky.
Information for October 2021