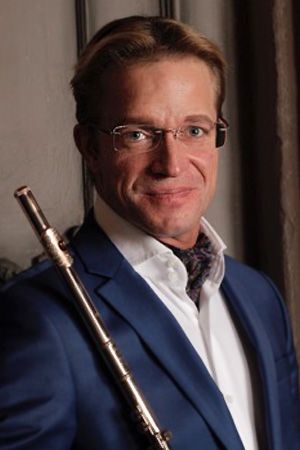 Nikolai Mokhov was born in St Petersburg and began to study the flute at the age of nine. Graduated from the Musorgsky School of Music (class of Yevgeny Matveyev) and the St Petersburg Conservatoire (class of Alexandra Vavilina-Mravinskaya). From 2001–2003 he trained at the Hochschule für Musik Karlsruhe (class of Renate Greiss), also studying under Aurèle Nicolet at the Chigiana Academy of Music (Siena). In 2000 he was a prize-winner of the Gartow Stiftung Competition (St Petersburg). Together with the St Petersburg Woodwind Quintet he has performed in Belgium, Finland, Israel, the USA and Germany and took 3rd prize at the ARD International Competition in Munich. Has worked with the orchestra of the St Petersburg Chamber Opera Company, the Mariinsky Youth Philharmonic Orchestra, the Russian National Orchestra (soloist and leader of the flute section from 2004–2006). Since 2006 he has been a soloist and leader of the flute section of the Mariinsky Orchestra, and since 2013 he has been the section’s concert-master.

In addition to working with the orchestra, Nikolai Mokhov appears in recitals at the Concert Hall of the Mariinsky Theatre (2011, 2013), the Small Philharmonic Hall (2016) and other concert venues. Mokhov’s repertoire includes music from over three centuries – from the baroque and classicism (Telemann, Bach, Quantz and Mozart) to contemporary works (Kancheli, Glass and Crumb). As a soloist and orchestra musician Nikolai Mokhov appears at major international festivals including the Stars of the White Nights, the Moscow Easter Festival, the Mikkeli Festival, Sound Ways and St Petersburg Embankments among others. His flute may be heard on Mariinsky label recordings (symphonies by Dmitry Shostakovich and other works). Mokhov performs with the Mariinsky Wind Quintet.

Nikolai Mokhov has run master-classes for young musicians in Ivangorod (2007), Samara (2012) and St Petersburg (2013) and served as a jury member of the International Akhmet Zhubanov Competition (Kazakhstan, 2013).