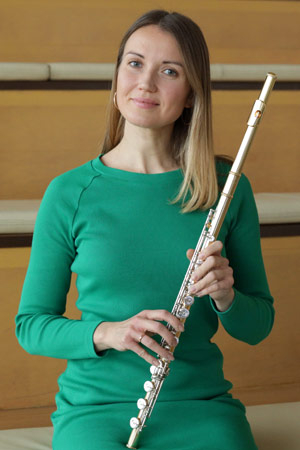 Prize-winner at the international competitions

Graduated from the St. Petersburg Special music school in 2005 where she studied under Irina Pimenova and in 2010 from the Conservatory itself where her teacher was Prof. Olga Chernyadyeva. From 2011 to 2013 Tatyana Khvatova perfected her art at the Musik-Akademie Basel (Switzerland) under Felix Renggli. She has also participated in the master classes led by the major world flute-players including James Galway, Peter-Lukas Graf, Claude Lefebvre, Vincent Lucas and Pierre-Yves Artaud.

She has appeared as soloist with the Mariinsky Orchestra, St. Petersburg State Capella Orchestra, Basel Symphony Orchestra and other ensembles. In 2013 she participated in the Musiktage Arthur Lourié festival in Basel.

From 2008 to 2011 Tatyana Khvatova worked in the St. Petersburg State Capella Orchestra and since 2013 has been member of the Mariinsky Orchestra where she currently holds the position of Assistant Soloist. She performs orchestra solos in The Tale of Tsar Saltan, Tosca, A Midsummer Night’s Dream and other plays and appears with solo and chamber programs at the Mariinsky Concert Hall and chamber halls.