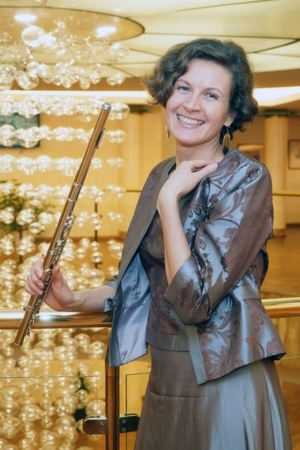 Prize-winner at the All-Union Competition (Voronezh, 1990).

Graduated from the St Peteresburg Conservatory in 1998 (class of Prof. Alexandra Vavilina), she also studied at the Yale School of Music with Prof. Ransom Wilson.

Since 1993 she has worked at the Mariinsky theatre. She plays orchestral solos in the operas and ballets (La forza del destino, Carmen, The Swan Lake, Mazepa, Shéhérazade, Salome, Petrushka, Le rossignol and many others) as well as in symphonic concerts, including the demanding solo in Maurice Ravel’s Daphnis et Chloé. In addition to the main instrument she plays piccolo flute and alto flute, performing all three parts in Benjamin Britten’s The Turn of the Screw.

Diana Cherezova performed solo and chamber concerts as well as with orchestra at the concert halls of Germany, USA and South Korea. In Russia she played at the St Petersburg Philharmonia Small Hall, St Petersburg Polytechnic University White Hall et al. She gave master-classes in China, South Korea and Estonia.