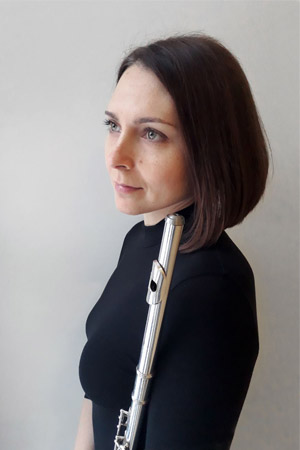 Born in Leningrad to a family of musicians, she began her flute lessons at the age of ten with Irina Pimenova. In 2002 she graduated from the St. Petersburg Conservatory where she studied with Gleb Nikitin. She participated in the master classes by Renate Greiss and Aurèle Nicolet and was awarded several prizes at the youth musical competitions including Gartow Stiftung competition in St. Petersburg in 2000.

Since 2000 she has been a member of the Youth Mariinsky Orchestra, participating in concert tours, festivals and recordings. In 2011–2012 she was assistant principal flute of the Kymi Sinfonietta (Finland), in 2012–2014 of the Stavanger Symphony Orchestra. Since 2014 she has been assistant principal flute of the Mariinsky Orchestra, also playing stage flute parts in Die Zauberflöte, Siegfried and Il viaggio a Reims.

Besides her orchestral work she performs solo and within ensemble at the concert venues of St. Petersburg.