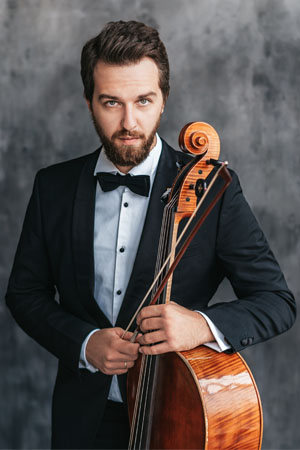 Ramm plays with enormous musical authority. Unlike many young instrumentalists, he is not intimidated by the reflective or the elegiac; nor is he nervous about the length of pauses, or the creation of inter-phrase silence. He has a phenomenal technique, and he demonstrated it to full effect in this captivating performance.

Alexander Ramm was born in 1988 in Vladivostok. Graduated from the Tchaikovsky Moscow State Conservatory (cello class of Natalia Shakhovskaya and chamber ensemble class of Alexander Bonduryansky) and completed a postgraduate course at the conservatory. Continued his studies at the Hochschule für Musik Hanns Eisler Berlin (class of Frans Helmerson).

Since 2011 he has featured in concert programmes of the Moscow Philharmonic Society, including the project Stars of the 21st Century, and has been a soloist at the St Petersburg Music House. Regularly performs at the Moscow Easter Festival.