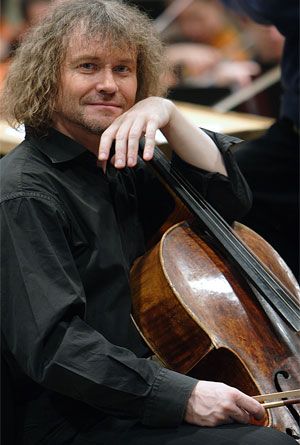 Kniazev is an artist who has an incredibly sense of musicality, elemental thinking and a phenomenally perfect technique.

Russian cellist Alexander Kniaziev is, of course, one of few to attain the loftiest praise and who is one of the most outstanding classical musicians of our time.

The musician has appeared with many renowned performers including Kurt Masur, Yevgeny Svetlanov, Mstislav Rostropovich, Yuri Temirkanov, Neeme Järvi, Vladimir Fedoseyev, Mikhail Pletnev, Yuri Bashmet, Vladimir Spivakov, Vadim Repin, Sergei Krylov, Denis Matsuev, Boris Berezovsky and Elisabeth Leonskaja. He has frequently appeared in a trio with Boris Berezovsky and Dmitry Makhtin and, more recently, with Nikolai Lugansky and Vadim Repin. Alexander Kniazev’s concerts have received great critical acclaim throughout the world at such prestigious venues as the Concertgebouw in Amsterdam, the Salle Pleyel and the Théâtre des Champs Élysées in Paris, the Palais des Beaux Arts in Brussels, Wigmore Hall and the Royal Festival Hall in London, the Mozarteum in Salzburg, the Musikverein and Konzerthaus in Vienna.

From 1995–2004 Alexander Kniazev taught at the Moscow State Conservatoire. He served on the juries of many international competitions. As an organist, Alexander Kniazev has given many highly acclaimed concerts both in Russia and abroad, performing recitals as well as works for organ and orchestra. Since 2015 he has also been giving concerts as a pianist.

His engagements for the current season include performances with Lada Labzina, Boris Berezovsky and Ekaterina Skanavi, the subscription Bach. Mozart. Two geniuses – two worlds at the Moscow State Conservatory, concerts at the Kaliningrad Cathedral and the National Museum of Music in Moscow.

Alexander Kniazev is a soloist with the Moscow Philharmonic.
Information valid for April 2018