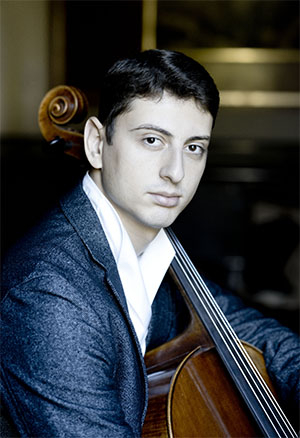 At the recital at the Kennedy Center, the hall was packed to the rafters and the audience, seeing and hearing the talent of such a musician, was ecstatic. You couldn’t but feel the aural and songfulness inherent in his playing. Without a doubt, a great career awaits him.
The Washington Post

Young Armenian cellist Narek Hakhnazaryan aimed to please his audience, and judging by the vociferous reception he succeeded. Clear and secure, and the performance was further distinguished by subtly nuanced moments of unexpected pull-back and reflection. It was, quite simply, the best Fantasiestücke I have ever heard.
The Buffalo News

Honoured Artist of the Republic of Armenia (2017)

Narek Hakhnazaryan was born in Yerevan, Armenia, into a family of musicians: his father is a violinist, his mother is a pianist, and he performs regularly with his brother, conductor Tigran Akhnazaryan.

Since winning the сello 1st prize and Gold Medal at the International Tchaikovsky Competition in 2011 at the age of 22, Narek Hakhnazaryan has performed with most major orchestras and in recital across the globe and has established himself internationally as one of the finest cellists of his generation.

An eager chamber and recital performer Hakhnazaryan has played in halls such as the Concertgebouw (Amsterdam), the Salle Pleyel (Paris), Wigmore Hall, the Konzerthaus Berlin, the Wiener Konzerthaus, the Shanghai Concert Hall, Carnegie Hall, Jordan Hall (Boston) and in summer 2017 toured Southeast Asia with concerts in Taipei, Seoul, Tokyo and Kyoto, where he performed the complete Bach cello solo suites. Hakhnazaryan has also performed at the Verbier, Rheingau, Lucerne, Mecklenburg-Vorpommern festivals, the Beethovenfest Bonn, the Kissinger Sommer, Ravinia, Aspen, Piatigorsky, Mikkeli and Pau Casals festivals amongst many others.

Mentored by the late Rostropovich, Hakhnazaryan received an Artist Diploma from the New England Conservatory of Music in 2011 where he studied with Lawrence Lesser. Prior to this he studied at the Tchaikovsky Moscow State Conservatory with Alexey Seleznyov and at the Yerevan Music School named after Sayat-Nova with Zareh Sarkisyan. Hakhnazaryan has received scholarships from the Mstislav Rostropovich Foundation and the New Names Foundation, and his prizes include 1st prize at the 2006 Aram Khachaturian International Cello Competition in Yerevan and 1st prize at the 2006 Johansen International Competition for Young String Players in Washington, DC.

Since 2015 he has been playing in the Z.E.N. Trio with pianist Zhang Zuo and violinist Esther Yoo, with whom he recorded two albums on the Deutsche Grammophon label – with works by Brahms and Dvořák (2017), Shostakovich, Rachmaninoff, Babajanian and Khachaturian (2020).