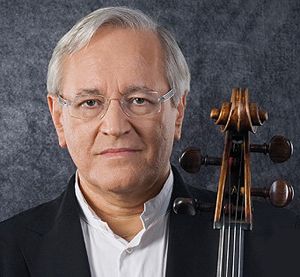 David (Dovydas) Geringas was born in Vilnius in 1946. In 1968 he graduated from the Tchaikovsky Moscow State Conservatory (cello class of Mstislav Rostropovich). Studied conducting under Juozas Domarkas at Lithuanian State Conservatory. Prize-winner at the All-Union Performing Musicians’ Competition (Baku, 1969; 1st prize) and the Tchaikovsky International Competition (Moscow, 1970; 1st prize and Gold Medal). He became a soloist with the Moskontsert in 1968 and with the Lithuanian Philharmonic in 1971.

Since 1975 he has lived and worked in Germany. Has served as a soloist with the Sinfonieorchester des Norddeutschen Rundfunks. From 1977 to 1986 he taught at the Staatliche Hochschule für Musik und darstellende Kunst in Hamburg, from 1980 to 2000 at Musikhochschule Lübeck and from 2000 to 2009 at the Hochschule für Musik Hanns Eisler Berlin. His students have included many acclaimed cellists, among them Gustav Rivinius, Jens Peter Maintz, Wolfgang Emanuel Schmidt, Tatjana Vassiljeva, Jing Zhao, Johannes Moser, Maximilian Hornung, Sol Gabetta, Ramón Jaffé and Boris Andrianov. At the invitation of Valery Gergiev in 2011 he was a co-chair of the cello jury at the Tchaikovsky International Competition. From 2014 to 2015 he was a visiting professor at the University of Southern California (Los Angeles) and the Manhattan School of Music, while in 2018 he headed the jury of the Alice and Eleonore Schoenfeld International String Competition (Harbin) and the George Enescu International Competition (Bucharest). He currently teaches at Blackmore International Music Academy (Berlin). Since 2005 he has also conducted a course at the Accademia Musicale Chigiana (Siena).

Has appeared as a cellist with the Berliner Philharmoniker, the Symphoniker Hamburg, the Bamberger Symphoniker, the Philadelphia Orchestra, the London Symphony Orchestra and the NHK Symphony Orchestra (Tokyo) among others. Has appeared alongside Gidon Kremer, Kim Kashkashian, Nobuko Imai, Viktor Tretiakov, Dmitry Sitkovetsky, Jascha Nemtsov and Baiba Skride among other acclaimed instrumentalists.

As a conductor he regularly appears in Germany and internationally, at some concerts in the dual roles of soloist and conductor. Has presented concerts at the Concertgebouw in Amsterdam, the Musikverein in Vienna, the Tonhalle Zurich and the Berliner Philharmonie.

In the West he was one of the first to begin to perform music of the Soviet post-war avant-garde period by such composers as Edison Denisov, Sofia Gubaidulina, Alfred Schnittke and Viktor Suslin to name but a few. David Geringas has had cello works dedicated to him by Sofia Gubaidulina (Und: Das Fest ist in vollem Gang, 1993), Ned Rorem, Pēteris Vasks, Erkki-Sven Tüür, Faustas Latėnas and Lepo Sumera. In 2002 Geringas performed in the world premiere of Anatolijus Šenderovas’ Concerto in Do, which is dedicated to him. In 2012 he performed three world premieres: Arvydas Malcys’ concerto In Memoriam, Silvia Colasanti’s Cello Concerto and Alexander Raskatov’s Cello Concerto.

The musician’s discography features over one hundred albums, many of which have received such awards and prizes as the Grand Prix du Disque of the Académie Charles Cros (for a recording of cello concerti by Luigi Boccherini), the Diapason d’Or (for a recording of chamber opuses by Henri Dutilleux) and the Preis der deutschen Schallplattenkritik (for cello concerti by Hans Pfitzner). In 2013 and 2014 Geringas received ECHO KLASSIK awards.

Between 2008 and 2011 he released eight discs, among them two world premieres (David’s Song by Anatolijus Šenderovas and Discorsi by Vytautas Laurušas), in addition to recordings of opuses for cello and piano by Rachmaninoff, Mendelssohn and Chopin and all works for cello and piano by Beethoven (with Ian Fountain; recipient of an award from Gramophone magazine). In October 2011 there came an album from the collection Bach Plus, featuring six cello sonatas by Bach and highlights from works by contemporary composers. Recent releases include the disc New Goldberg Variations, recorded in collaboration with Ian Fountain (2018).