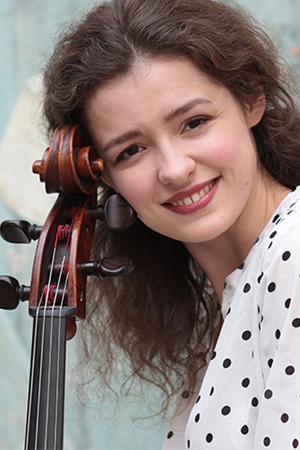 Anastasia Kobekina was born in Yekaterinburg in a family of musicians. At the age of four she began to play the cello, graduating with distinction in 2012 from the Central Music School of the Moscow State Tchaikovsky Conservatory. Following the completion of her studies at the Central Music School in Moscow she was invited to study at the Kronberg Academy with Frans Helmerson. She continued her studies at the Berlin University of the Arts in the class of Jens Peter Maintz. She is currently studying at the Conservatoire de Paris (class of Jérôme Pernoo) and at the Frankfurt University of Music and Performing Arts (class of Kristin von der Goltz).

In September 2015 she won 1st prize at the TONALi competition in Hamburg and, as a competition prize-winner, she was given the opportunity to perform an instrument crafted by Giovanni Guadagnini (1740). In 2019 she won the 3rd prize at the International Tchaikovsky Competition.

Has appeared as a soloist with the orchestras Moscow Virtuosi, Kremerata Baltica, the Wiener Symphoniker, the Tchaikovsky Symphony Orchestra, the National Philharmonic Orchestra of Russia, the Russian National Orchestra, the Sinfonia Varsovia orchestra. Has taken part in the festivals Crescendo, Stars on Baikal, Vladimir Spivakov Invites and festivals in Colmar and Annecy (France).

In 2018 she was awarded the Prix Thierry Scherz and the Prix André Hoffmann at the festival Sommets Musicaux de Gstaad, a reward that comprises a recording with orchestra for the Swiss recording label Claves (released in April 2019).

Her engagements for the 2019–20 season include a debut with the Royal Liverpool Philharmonic Orchestra, participation in the Chamber Music Week of the Verbier Festival and a concert tour with the Konzerthausorchester Berlin.
Information for September 2019