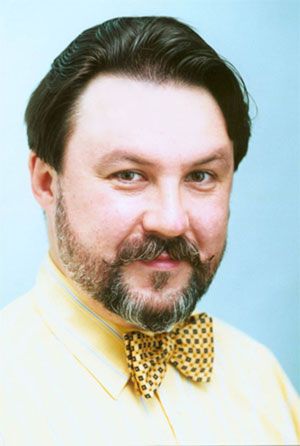 Professor at the St Petersburg and Moscow State Conservatoires, the Russian University of Theatre Arts and the Moscow State University. Born in Leningrad. In 1983 he graduated from the vocal faculty of the Leningrad State Rimsky-Korsakov Conservatoire (class of Konstantin Laptev, People’s Artist of the USSR, and in 1988 from the stage directing faculty of the Conservatoire (class of Professor Roman Tikhomirov, People’s Artist of the USSR, and Semyon Lapirov.

Since 1988 he has been a stage director and Mariinsky (Kirov) Opera soloist. In the 2000 – 2001 season he was a soloist with the Metropolitan Opera (New York, USA).
The soloist’s repertoire includes over thirty roles, among the m Shchelkalov (Boris Godunov), the Pastor (Khovanshchina), the Duke (The Miserly Knight), Don Carlos (Betrothal in a Monastery), Denisov (War and Peace), Baron Douphol (La traviata), Count Almaviva (Lе nozze di Figaro) and Ibn-Hakia (Iolanta).

Has appeared at festivals and on tour with the company to the USA, Japan, Germany, Great Britain, France, Spain, the Nethe rlands, Belgium, Israel, Italy, Finland, Argentina and Chile.
Has appeared as a soloist at the atres throughout the world, among the m the Metropolitan Opera, Covent Garden, the Opera di Roma, La Scala, the Tel Aviv Opera and the Semperoper as well as at the philharmonic venues of Santa Cecilia, the Concertgebouw and the Brussels Philharmonic.
From 2006 – 2009 he was a soloist with the Bolshoi Theatre in Moscow. Has appeared in audio and video recordings of the operas Boris Godunov, Otello, The Fiery Angel, Khovanshchina, War and Peace, La forza del destino, The Gambler and The Maid of Pskov.

He has staged productions of the operas Khovanshchina at the Teatro alla Scala (Milan), Women in Revoltat the St Petersburg Musical Comedy Theatre, Prince Igor at the Yekaterinburg State Opera and Ballet Theatre, Il campanello (2002), Rigoletto (2006) and Carmen at the Rostov State Musical Theatre, Die Fledermaus at the Irkutsk Zagursky Musical Theatre, The Maid of Pskov in Pskov togethe r with the State Academic Bolshoi Theatre of Russia, Boris Godunov, Iolanta and Mazepa at Vyborg Castle and Iolanta and Mazepa at Ivangorod Fortress. Has directed White Nights balls over the years in Peterhof, Tsarskoe Selo, the Constantine and Marble Palaces in addition to directing a concert marking the State celebration of Days of Slavic Writing and Culture at the Grand Kremlin Palace in 2010, 2011 and 2012.