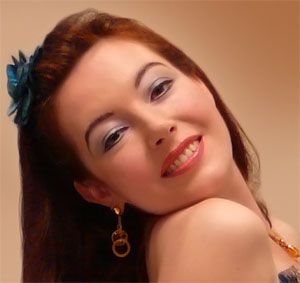 Flora, sung by Larisa Yelina, stood out for its bright and youthful tone.”

• Prize-winner at the XVII festival Theatres of St Petersburg for Children in the category “Best Female Role” for her performance as Little Red Riding Hood in Mikhail Rauchwerger’s opera Little Red Riding Hood
• Recipient of the Special Prize and a diploma for the best performance of a Bulgarian song at the XIII International Boris Christoff Young Opera Singers’ Competition (Sofia, Bulgaria, 2004)
• Recipient of an award from the St Petersburg Government “For a significant contribution to the development of culture and the arts” (2010)

Larisa Yelina graduated with distinction from the vocals and the composition and history of music faculty of the Nizhny Novgorod Glinka State Conservatoire in 2000. As a student, she worked as a soloist with the Municipal Opera Theatre in Arzamas, where she made her debut as Leonora (Il trovatore).
From 1997–2000 she appeared in concerts with the Nizhny Novgorod State Philharmonic, performing with the Symphony Orchestra under the baton of Alexander Sulsky, Honoured Artist of Russia.
From 2000–2006 she was a soloist with the Mariinsky Academy of Young Singers.
She has taken part in master classes given by Vladimir Atlantov and Elena Obraztsova. Since the 2006–2007 season she has been a soloist with the St Petersburg State Philharmonic for Children and Young People.

In November 2009 she performed recitals on tour to Japan (Tokyo and Nagano). In March 2010 she took part in the Mariinsky Theatre’s tour to Hong Kong, where she performed the role of Flora in the opera The Turn of the Screw under the baton of Valery Gergiev. In October 2011 she took part in a concert performed for the Japanese imperial family in Tokyo.