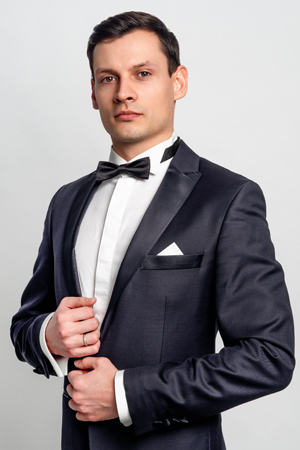 Roman Shirokikh was born in Naberezhnye Chelny in 1994. In 2021 he graduated from the Rimsky-Korsakov St Petersburg State Conservatory (class of Yury Marusin).

In 2020–2021 Roman was a soloist with St Petersburg’s Zazerkalye theatre. He also appeared at the St Petersburg Music Hall Theatre and the Armorial Hall of the State Hermitage among other venues.
Performed the parts of the Young Gypsy (Aleko), Vaudémont (Iolanta), Lensky (Eugene Onegin), Chekalinsky (The Queen of Spades), Rodolfo (La Bohème), Cassio (Verdi’s Otello), Antonio (Betrothal in a Monastery), Idamante (Idomeneo, re di Creta) and the tenor role in Mozart’s Requiem.

Has taken part in a programme of the international creative project Baltic Sea Music Academy and has toured to Baltic cities.

In 2021 the singer became a fellow of the Atkins Young Artists Program at the Mariinsky Theatre. In 2022 he made his debut at the theatre, performing the part of Vaudémont in Iolanta.