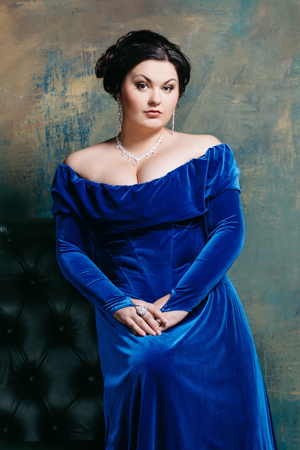 Olesya Petrova was born in Leningrad. In 2008 she graduated from the Rimsky-Korsakov St Petersburg State Conservatory (class of Irina Bogacheva). In 2007–2016 she was a soloist with the Opera and Ballet Theatre of the St Petersburg Conservatory. Since 2016 she has been a soloist at the Mikhailovsky Theatre, where she performs the roles of Ulrica in Un ballo in maschera, Santuzza in Cavalleria rusticana and the Countess in The Queen of Spades among others.

In 2014 she made her debut at the Metropolitan Opera in a production of Andrea Chénier (Madelon); she has also appeared in Les Contes d’Hoffmann (Voice of Antonia’s mother), Luisa Miller (Federica), Aida (Amneris), Rigoletto (Maddalena), Prince Igor (Konchakovna) and Khovanshchina (Marfa).

In 2018 she made her debut at the Bolshoi Theatre of Russia, performing the role of Polina in a production premiere of The Queen of Spades (conducted by Tugan Sokhiev and directed by Rimas Tuminas).

As a guest soloist, she has appeared with the Greek National Opera (Ulrica in Un ballo in maschera and Suzuki in Madama Butterfly), the Opernhaus Zürich (Konchakovna in Prince Igor), the Latvian National Opera (Azucena in Il trovatore and Amneris in Aida), the Hamburger Staatsoper (Mrs Sedley in Peter Grimes and Federica in Luisa Miller), Madrid’s Teatro Real (Amelfa the Housekeeper in The Golden Cockerel), Barcelona’s Gran Teatre del Liceu (Emilia in Otello), the Opéra de Montréal (Fenena in Nabucco and Amneris in Aida), the Perm Opera and Ballet Theatre (Joan in The Maid of Orleans and the Duenna in Betrothal in a Monastery) as well as at the Arena di Verona Festival.

In 2016 she performed the role of Marguerite in La Damnation de Faust in an anniversary concert by the Latvian National Symphony Orchestra (conducted by Vassily Sinaisky).