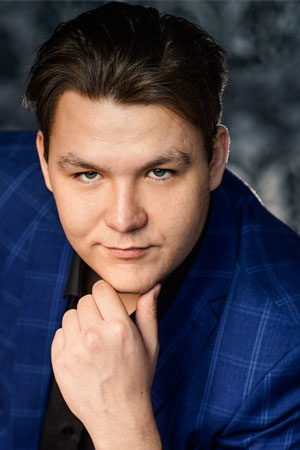 Anatoly Mikhailov was born in the town of Glazov (Udmurtia) in 1996. In 2020 he graduated from the Ural State Musorgsky Conservatoire (class of Valery Sherstov). Has taken part in a masterclass conducted by Ildar Abdrazakov.

In 2020–2021 Anatoly Mikhailov was a soloist with the Eric Sapaev Mari State Opera and Ballet Theatre (Yoshkar-Ola), where he performed the parts of Escamillo (Carmen), Grigory Gryaznoy (The Tsar’s Bride) and Eugene Onegin.

In 2021 the singer became a fellow of the Atkins Young Artists Program at the Mariinsky Theatre. He made his debut at the theatre in 2022 – first in a concert by young opera soloists, then in Eugene Onegin.

Has sung in the premiere of a new Mariinsky Theatre production of The Love for Three Oranges (2022, 1991 production revival).

His repertoire also includes the roles of Mizgir (The Snow Maiden) and Prince Yeletsky (The Queen of Spades).
Information for December 2022