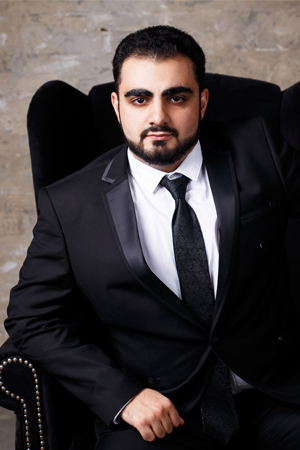 As a child he won prizes at international piano competitions in Paris, Pesaro, Kiev and Yerevan and was awarded the Young Talents of Russia federal prize in addition to becoming a grant-recipient of the Vladimir Spivakov International Charity Foundation (2007). Migran studied singing with Vladimir Eknadiosov, a teacher at the Rostov State Rachmaninoff Conservatoire and sang in the children’s chorus of the Rostov State Musical Theatre.

In 2012 Migran Agadzhanyan made his Mariinsky Theatre debut, performing the part of Moralès in Carmen.

In 2015 he appeared in the semi-final of the Operalia competition (London), following which he was given the opportunity to train as a member of Los Angeles Opera’s Young Artist Program, Lyric Opera of Chicago and the Metropolitan Opera. In the 2016–17 season the musician was a soloist with the Grand Théâtre de Genève.

In January 2022 Migran Agadzhanyan made his debut as a conductor at the Perm Opera and Ballet Theatre (La Bohème), and in February he became its Principal Conductor.
Information for May 2022