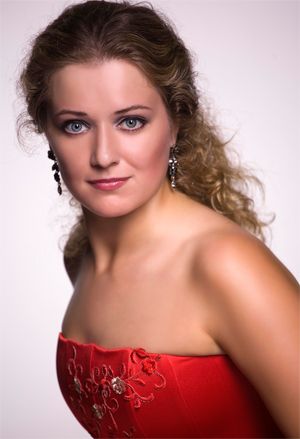 One discovery came with Olga Trifonova, whose light, flexible, very warm timbre and somehow enveloping voice, which depicted the unbelievable complexities of the Nightingale’s trills, enchanted not just the Emperor of China and his Death but the entire audience in the hall as well.
Kommersant

Olga Trifonova was born in Leningrad. Graduated from the St Petersburg State Rimsky-Korsakov Conservatoire in 1998 (class of Professor Gagen). Made her Mariinsky Theatre debut in 1994 as Barbarina (Le nozze di Figaro).

Olga Trifonova's repertoire also includes Elvira (I puritani) and Norina (Don Pasquale).
Olga Trifonova has appeared at the world's leading opera venues. In 1998 she made her Salzburg Festival debut as Klingsor's Flower Maiden (Parsifal), in 1999 she performed as Prilepa (The Queen of Spades) at the Metropolitan Opera, and in 2000 she sang as Oscar (Un ballo in maschera) at the Opera di Parma and as Fiakermilli at the Théâtre du Châtelet (Paris). Other roles Olga Trifonova has performed throughout the world include Marfa (The Tsar's Bride; 2003, Bordeaux Theatre), Gilda (Rigoletto; 2005, Welsh National Opera), Nanetta (Falstaff; 2006-2007, Washington Opera) and Musetta (La bohème; 2007, Baden-Baden).
In summer 2003 Olga Trifonova took part in a production of the opera The Tsar's Bride at the Théâtre du Châtelet (directed by T. Chkheidze).

With the Mariinsky Opera Company, Olga Trifonova has toured to Finland, Germany, Israel, the USA, Belgium, Japan, France, Slovenia, Italy, Turkey, Switzerland, the Netherlands, Spain, the UK and Austria. She has appeared at the Metropolitan Opera (New York), the Opéra Bastille (Paris) and the Lincoln Center (New York). In the 2002-2003 season, Olga Trifonova sang at the premiere of the opera The Golden Cockerel (directed by E. Ichikawa), staged by the Mariinsky Theatre as part of the Saisons russes at the Théâtre du Châtelet, and in 2004 she appeared as Marfa in the premiere performance of The Tsar's Bride at the Diaghilev Festival in Groningen (staged by Yuri Alexandrov, conducted by Valery Gergiev).