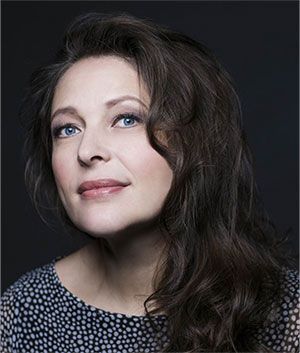 While a student at the conservatory, the singer made her debut at the Opera and Ballet Theatre of the St Petersburg Conservatory as Violetta Valéry in La traviata, also appearing as Musetta in La Bohème and Fiordiligi in Così fan tutte.

From 2000 to 2002 she was a soloist with the St Petersburg State Musical Theatre for Children Zazerkalye, where she appeared in Villa-Lobos’ Bachianas brasileiras, as Giulietta and Antonia in Offenbach’s opera Les Contes d’Hoffmann.

In 2002 Tatiana Serjan made her Italian debut at the Teatro Regio in Turin as Lady Macbeth in Verdi’s Macbeth, a role she subsequently performed on numerous occasions at opera houses throughout Europe and the USA as well as at the Salzburg Festival and the Teatro dell’Opera di Roma under Riccardo Muti.

At the Mariinsky Theatre she debuted in 2013, appearing as Leonora in a concert performance of Il trovatore.
Mariinsky Opera soloist since 2014.

Has performed the role of Amelia in Un ballo in maschera in Ancona, Rovigo, Trento, Catania, Amsterdam, Berlin and Zurich and the role of Leonora in Il trovatore at theatres in Bregenz, Geneva and Trieste.

She has sung the lead part in Hindemith’s opera Sancta Susanna at the Ravenna Festival, in New York, Lisbon, Montpellier and Milan (Teatro alla Scala). Has performed the roles of Freia in Das Rheingold (Lisbon), Donna Elvira in Don Giovanni and the title role in Norma (Trieste). Debuted as Tosca in Bologna, later singing the same part in Palermo, Bregenz, Berlin and Munich.

Made her first appearance in Aida at the Bregenz Festival. In Verdi’s I due Foscari she has sung the role of Lucrezia Contarini at theatres in Palermo, Modena and Rome.

At the Teatro dell’Opera di Roma Tatiana Serjan has performed as Lida in Verdi’s opera La battaglia di Legnano and Odabella in Attila under the baton of Riccardo Muti. In the summer of 2012 she made her debut as Maddalena di Coigny in Andrea Chénier in Bregenz. On numerous occasions the singer has performed solo roles in spiritual works at the Grand Hall of the St Petersburg Philharmonia, the St Petersburg State Capella, Smolny Cathedral, the State Hermitage and other venues throughout St Petersburg.

In 2004 she took part in a concert performance of Norma at the Ravenna Festival and in Bosra (Syria) under Riccardo Muti. This performance was broadcast on Italian TV.

Has performed the soprano role in Shostakovich’s Fourteenth Symphony in Lisbon and Bregenz and in Verdi’s Requiem in London, Tenerife, Toulouse, San Sebastián, Paris, Brescia, Bologna, Montpellier, Kazan and Moscow.

Under the baton of Riccardo Muti in 2013 she appeared at the Teatro dell’Opera di Roma in lead roles in I due Foscari (Lucrezia Contarini), Nabucco (Abigaille) and Ernani (Elvira) and in Chicago with the Chicago Symphony Orchestra in Macbeth (Lady Macbeth) and sang the soprano role in a performance of the Requiem marking two centuries since Verdi’s birth.

Has portrayed Lady Macbeth at the Teatro alla Scala and the Mariinsky Theatre under Valery Gergiev and at the Maggio Musicale Fiorentino festival under James Conlon.

At the Mstislav Rostropovich International Festival in Moscow and in Bologna she has performed the soprano role in Verdi’s Requiem.

In 2016 Tatiana Serjan was awarded the Casta Diva Russian opera prize for the parts of Amelia Grimaldi in Simon Boccanegra and Leonora in Il trovatore (Mariinsky Theatre) and Lady Macbeth in Macbeth (Opernhaus Zürich).