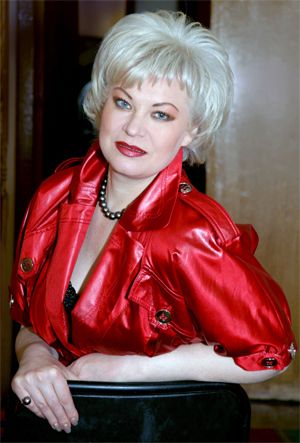 Brunnhilde was Olga Sergeeva, who has sung that role at the Met before (and under Mr. Gergiev). She can handle the part, which is something to be grateful for, because Brunnhildes don't grow on trees. She was never less than adequate, and, at her best, she was touching.
The New York Sun

The Brunnhilde, Olga Sergeeva, gave an impassioned and often subtle account of this touchstone and demanding role.
The New York Times

Soprano Olga Sergeeva, with her focussed and silvery voice, created a living and believable Kuma, offering a stream-like legato in the gorgeous melodic line.
Classical Voice

• Honoured Artist of Russia
• Prize-winner at the I International Elena Obraztsova Young Opera Singers’ Competition (St Petersburg, 1999)
• Recipient of the Golden Sofit, St Petersburg’s most prestigious the atre prize, for her portrayal of the role of Fevronia in the opera The Legend of the Invisible City of Kitezh and the Maiden Fevronia (in the category “Best Female Role in Opera,” 2001)

Olga Sergeyeva is a leading Mariinsky Opera Company soloist in the Wagnerian repertoire.

Olga Sergeyeva has taken part in music festivals in Baden-Baden (Germany) and Ravello (Italy) as well as the Verdi Festival in Parma (Italy); has toured to Moscow, London, Manchester and Hong Kong.

In 2001 togethe r with the Mariinsky Opera Company she performed at the Royal Opera House, Covent Garden, appearing as Amelia (Un ballo in maschera), Aida (Aida) and Lady Macbeth (Macbeth).
In 2002 she performed the role of Kuma (The Enchantress) at the Opera House in Lisbon (conducted by Zoltán Peskó).
In 2004 Olga Sergeyeva made her debut at the Metropolitan Opera (New York), where she performed the role of Brünnhilde (Die Walküre, opposite Plácido Domingo as Siegmund, conducted by Valery Gergiev), and in 2005 she performed the same role at the Théâtre du Châtelet in Paris (conducted by Christoph Eschenbach).
In 2006 she appeared in London (Royal Albert Hall) and Madrid as Brünnhilde in the opera Siegfried with the Orchestre Symphonique de Paris under Christoph Eschenbach. Since 2006 she has also appeared in the Mariinsky Theatre’s triumphant touring performances of Richard Wagner’s tetralogy Der Ring des Nibelungen in Tokyo, London (Covent Garden), Seoul, Moscow (Bolshoi Theatre), New York (Metropolitan Opera) and Germany (Baden-Baden festival).
In 2008 in Madrid she performed the role of Tosca in the eponymous opera (conducted by Valery Gergiev). She has performed Musorgsky’s Songs and Dances of Death and the soprano role in Shostakovich’s Fourteenth Symphony with the London Symphony Orchestra (2006 and 2008, conducted by Valery Gergiev).
Togethe r with the Mariinsky Theatre Orchestra she performed the soprano role in Shostakovich’s Fourteenth Symphony in Stockholm, Vienna and Amsterdam (Concertgebouw) in 2010, with the Munich Philharmonic Orchestra in 2011 (conducted by Valery Gergiev).
The same year, Olga Sergeyeva performed the role of Barak’s Wife in Richard Strauss’ Die Frau ohne Schatten and subsequently appeared on tour with this project togethe r with the Mariinsky Theatre in Slovenia, throughout Russia, Japan and Scotland (Edinburgh Festival). In 2011 she performed this role at festival in Mexico City and took part in a film recording of the opera Die Frau ohne Schatten which was presented during the Stars of the White Nights festival (St Petersburg).