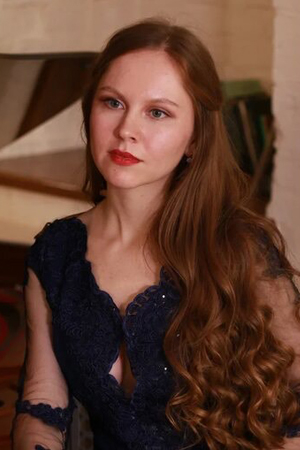 Yekaterina Savinkova was born in Tashkent. In 2018 she graduated from the Glinka Nizhny Novgorod State Conservatoire (class of Svetlana Livshina), in 2020 completing an assistant-traineeship at the Tchaikovsky Moscow State Conservatory (class of Lydia Chernykh). From 2014 to 2017 she was a trainee at the Galina Vishnevskaya Opera Centre, where she performed the roles of Marfa (The Tsar’s Bride), Gilda (Rigoletto) and Brigitta (Iolanta).

Has collaborated with the conductors Alexander Solovyov, Alexander Zhilenkov, Marco Boemi and Fabrizio Cassi among others.

In 2021 she became a fellow of the Atkins Young Artists Program at the Mariinsky Theatre. That same year she made her debut at the theatre, performing the part of Prilepa in The Queen of Spades.

Has taken part in the premiere of a new Mariinsky Theatre production of The Legend of the Invisible City of Kitezh and the Maiden Fevroniya (2022, new revision of the 1994 production).