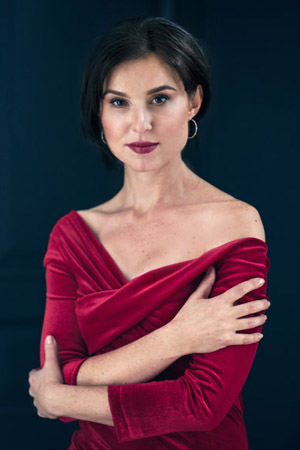 Pelageya Kurennaya was born in Rostov Region. In 2016 she graduated with distinction from the Rimsky-Korsakov St Petersburg State Conservatory (class of Tamara Novichenko).

In 2014 she appeared as Prilepa in the concert performance of The Queen of Spades directed by Mariss Jansons at the Gasteig Munich as well as at the Philharmonie Luxembourg. A year later she participated in Valery Gergiev’s MPHIL 360° festival in Munich, performing Tanja–Katja by Rodion Shchedrin with the Mariinsky Orchestra.

Took part in the Czech premiere (2019) and the Mariinsky Theatre premiere (2020) of Rodion Shchedrin’s opera Lolita, in which she performed title role. Has appeared at the Bolshoi Theatre of Russia and the Tchaikovsky Concert Hall in Moscow, the Grand Hall of the Moscow Conservatory, the National Theatre in Prague, St Louis’ Powell Hall, the Helsinki Music Centre, the Rossini Opera Festival in Pesaro (Italy) and the Septembre Musical Montreux–Vevey festival in Switzerland.