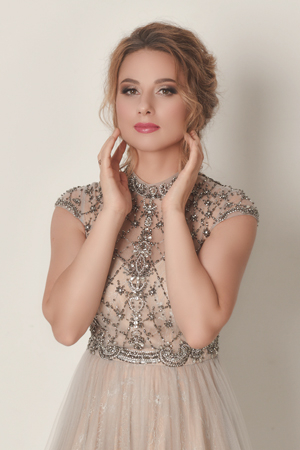 Evgenia Muravieva was born in Leningrad. In 2008 she graduated from the Rimsky-Korsakov St Petersburg State Conservatory (class of Professor Irina Bogacheva). While a student Evgenia made her debut as Tatiana in Eugene Onegin at the Opera and Ballet Theatre of the St Petersburg Conservatory.

From 2007 to 2011 she was a soloist with the Mariinsky Academy of Young Opera Singers. In 2009 she appeared at the Mariinsky Theatre as Pannochka in May Night, followed by the roles of the First Dame in Die Zauberflöte and the First Nymph in Dvořák’s Rusalka.

In 2016 Evgenia debuted at the Komische Oper Berlin in the part of Tatiana (Eugene Onegin).
In August 2017 she made her Salzburg Festival debut as Katerina Ismailova in production of The Lady Macbeth of Mtsensk (conductor Mariss Jansons, director Andreas Kriegenburg) and received great critical acclaim. In 2018 she returned to the Salzburg Festival as Liza in The Queen of Spades.

In the 2018–19 season she had successful debuts with the Opéra de Lyon as Margherita/Elena (Mefistofele) and with the Théâtre du Capitole Toulouse as Marietta (Die tote Stadt). She appeared at the Teatro alla Scala as Emma (Khovanshchina), sang Cio-Cio-San (Madama Butterfly) at the Teatro di San Carlo in Naples and Nedda (Pagliacci) at the Teatro Massimo in Palermo.

In the 2019–20 season she appeared as Tatiana (Eugene Onegin) at the New National Theatre in Tokyo, sang the title role in Tosca at the Vienna State Opera and Tamara (The Demon) at the Opéra National de Bordeaux.

Since 2021 she has been a soloist with the Mariinsky Theatre.