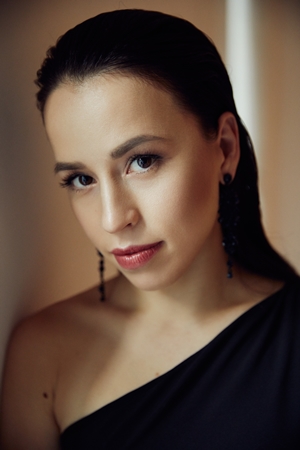 Aigul Khismatullina was born in Naberezhnye Chelny (Republic of Tatarstan). In 2014 she graduated from the Zhiganov Kazan State Conservatoire (class of Klara Khayrutdinova), following which she undertook an assistant traineeship under Albina Shagimuratova (2014–2016).

From 2016 to 2017 she was a soloist at the Primorsky Stage of the Mariinsky Theatre in Vladivostok.

From 2017 to 2021 she was a fellow of the Atkins Young Artists Program at the Mariinsky Theatre.

In 2018 she made her Mariinsky Theatre debut as the Nightingale in Stravinsky’s opera Le Rossignol.

Has sung in the premiere performance of a new Mariinsky Theatre production of Pelléas et Mélisande (2019).

In 2021 she performed the part of Gilda (Rigoletto) at the Gran Teatre del Liceu in Barcelona.
Information for June 2022