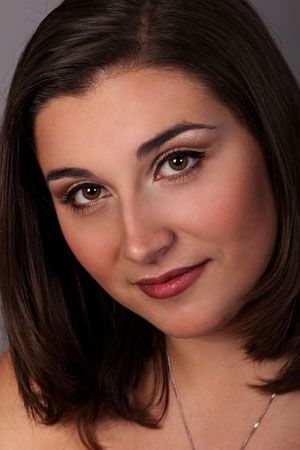 Irina Churilova was born in Novosibirsk. In 2009 she graduated from the Glinka Novosibirsk State Conservatoire (class of Zinaida Didenko). Has taken part in masterclasses given by Diane Zola and Montserrat Caballé and trained under Enza Ferrari.
From 2008 to 2018 she was a soloist at the Novosibirsk State Academic Opera and Ballet Theatre.

Made her Mariinsky Theatre debut in 2013, appearing as Marguerite in the premiere of a new production of Faust. Since then she has regularly performed in St Petersburg. Has sung in Mariinsky Theatre premieres of the operas The Queen of Spades (2015), Simon Boccanegra (2016) and The Maid of Orleans (2021). For the role of Liza in The Queen of Spades she received a nomination for Russia’s Golden Mask National Theatre Award.
Joined the Mariinsky Opera Company in 2018.

Irina Churilova has taken part in on-tour performances of the Mariinsky Company in Baden-Baden, Shanghai (The Queen of Spades), Rome, Paris, Hamburg, Munich, Berlin, Lucerne, Budapest (Iolanta), Rotterdam (concert of Tchaikovsky’s music), Pamplona (Mahler’s Second Symphony) and Tokyo (Don Carlo and The Queen of Spades). In 2018 she appeared in the world premiere of a new version of Sofia Gubaidulina’s oratorio Über Liebe und Hass conducted by Valery Gergiev in Rotterdam.

As a guest soloist she also performs at the Bolshoi Theatre of Russia. In 2012 Irina was invited by Montserrat Caballé to take part in her anniversary concert at the Gran Teatre del Liceu in Barcelona, and in 2014 – in her anniversary concert at Madrid’s Teatro Real (together with such singers as José Carreras, Juan Diego Flórez, Joan Pons, Mariella Devia and Carlos Álvarez).

In the 2016–17 season she made her debuts as Norma at the Oper Graz (Austria) and as Aida at the Arena di Verona Opera Festival.

In the 2017–18 season Irina Churilova appeared for the first time at the Savonlinna Opera Festival (Finland) as Liza (The Queen of Spades) and at the Deutsche Oper Berlin (Verdi-Gala).

In the 2019–20 season the singer performed the role of Amelia at the Deutsche Oper Berlin (Götz Friedrich’s production).

In the 2021–22 season she appeared as Elisabeth de Valois in Don Carlo (staged by Marco Arturo Morelli) and as Amelia at that theatre, as Liza at the Gran Teatre del Liceu (Gilbert Deflo’s production) and as Gioconda in La Gioconda at the Teatro alla Scala (staged by Davide Livermore).