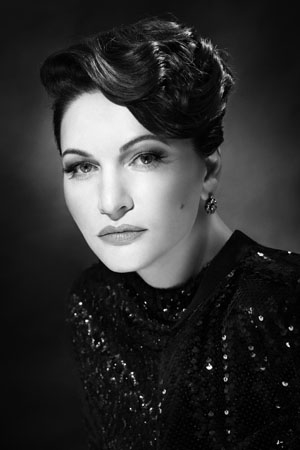 Hibla Gerzmava was born in Pitsunda. In 1994 she graduated from the Tchaikovsky Moscow State Conservatory, completing an assistant traineeship at the conservatory in 1996 (supervised by Irina Maslennikova). Over three years she took an elective in organ studies.

In 1995 she became a soloist at the Stanislavsky and Nemirovich-Danchenko Moscow Music Theatre.
In 2001 she established the annual music festival Hibla Gerzmava Invites…, which for many years was presented by Svyatoslav Belza.

She made her debut at the Mariinsky Theatre in 2002, performing the role of Lyudmila in Ruslan and Lyudmila. At the theatre she appears in opera performances and gives concerts, including the ones with Ekaterina Semenchuk and Elīna Garanča.

Has recorded numerous CDs and DVDs, among them Opera. Jazz. Blues, Ave Maria, Oriental Romances and Vocal Cycles and Romances by Russian Composers (works by Tchaikovsky, Rachmaninoff, Myaskovsky and Prokofiev).

Recipient of the prizes Golden Orpheus (2001) and Casta Diva (2010) in the category “Best Female Singer”, the City of Moscow Prize for Literature and the Arts (2010), the Triumph prize (2011), Russia’s Golden Mask National Theatre Award (2012 and 2016), the Culture and Arts Award of the Ministry of Defence of the Russian Federation for 2020. Since September 2021 she is President of the Onegin National Opera Award.
Information for December 2022