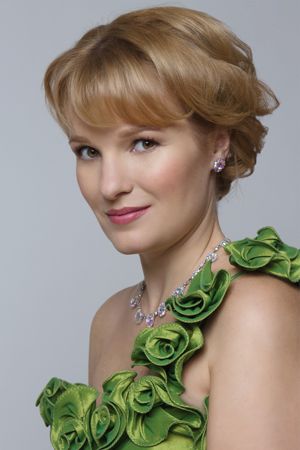 Lyudmila Razumkova (Dudinova) was born in Chelyabinsk. In 2002 she graduated from the Rimsky-Korsakov St Petersburg State Conservatory. While still a student, Lyudmila Razumkova was appearing professionally, performing the role of Iolanta in the eponymous opera and the soprano role in Mozart’s Requiem at the Opera and Ballet Theatre of the St Petersburg Conservatory. In 2005 she represented Russia at the BBC Cardiff Singer of the World competition (Wales).

From 2002 she was a soloist with the Mariinsky Academy of Young Opera Singers.

Since 2009 she has been a member of the Mariinsky Opera Company.

Lyudmila Razumkova works with various Russian and foreign music ensembles. In 2005 she took part in a production of the opera Le Rossignol with the Toronto Symphony Orchestra (conducted by Gianandrea Noseda), performing as the Cook.
In 2007 she sang as Aksinya (Katerina Ismailova) at the Théâtre du Châtelet (Paris) with the Orchestre National de France. In 2013 she toured with the Classical Concert Chamber Orchestra (USA) to the Scandinavian capitals (artistic director Ashot Tigranyan). Has collaborated with such conductors as Yuri Temirkanov, Carlo Rizzi and Saulius Sondeckis.