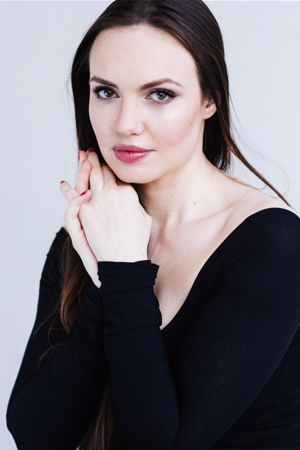 Maria Bayankina was born in the village of Zyryanovsky, Sverdlovsk Region, and spent her childhood in Izhevsk. Graduated from the Faculty of Vocal Studies of and completed a postgraduate study at the Gnesin Russian Academy of Music (class of Evgenia Shevelyova). During her years as a student she collaborated with the Petit Opera artistic group, participating in performances of Purcell’s operas King Arthur, The Tempest, Dido and Aeneas and The Fairy-Queen. Appeared as a guest soloist at the Teatro Ventidio Basso (Ascoli Piceno, Italy). In 2011 the singer was awarded a grant from the Wagner Foundation, which affords young artists the opportunity to visit Bayreuth. That same year she became a soloist with the Mariinsky Academy of Young Opera Singers.

In January 2013 she made her Mariinsky Theatre debut as Tsaritsa Militrisa in The Tale of Tsar Saltan.

In the 2018–19 season at the Martha Argerich Festival in Hamburg Maria sang in Stravinsky’s Les Noces (conducted by Charles Dutoit). In November 2019 she made her company debut at the Bolshoi Theatre of Russia in Weinberg’s The Idiot. In the 2019–20 season the singer appeared as Francesca da Rimini in the eponymous opera by Rachmaninoff at the Concertgebouw in Amsterdam (conducted by Stanislav Kochanovsky) and as Tatiana in Eugene Onegin at the Teatro dell’Opera di Roma (conducted by James Conlon). Together with the Mariinsky Opera conducted by Valery Gergiev she has taken part in tours to countries throughout Asia, performing the role of Maria (Mazepa) at Beijing’s National Centre for the Performing Arts and Tokyo’s Suntory Hall. In March 2021 the singer appeared as Renata in The Fiery Angel at the Internationales Musikfest Hamburg (conducted by Valery Gergiev). In 2022 Maria Bayankina has portrayed Tatiana at the Bucharest National Opera, Floria Tosca at the State Academic Bolshoi Theatre of Uzbekistan named after Alisher Navoi (Tashkent) and Aida in the town of El Gouna (Egypt).

Since 2019 she has been a soloist with the Mariinsky Opera.

In 2017 together with soloists of the academy she took part in a production of The Enchantress at the Teatro di San Carlo in Naples (directed by David Pountney). Performed on Mariinsky Opera tours to Japan and Baden-Baden. At the Mariinsky Theatre she has sung in the premiere of a new production of Eugene Onegin (2014), in the theatre’s premieres of The Idiot (2016), La fanciulla del West (2019) and in the world premiere of Leonid Klinichev’s opera The Cossacks (2016).

Regular participant at the Moscow Easter Festival and Denis Matsuev’s festivals Stars on Baikal and Crescendo. Has appeared in concerts of the Mariinsky Academy of Young Opera Singers in Italy, Great Britain, Sweden, Austria and France.