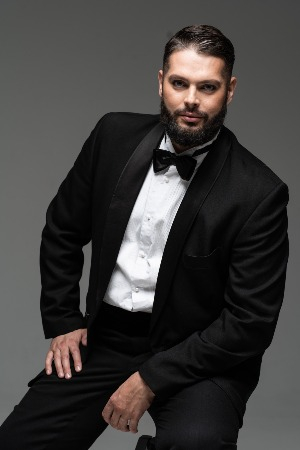 Yakov Strizhak was born in Petropavlovsk (North Kazakhstan Region) in 1982. In 2010 he graduated from the Rimsky-Korsakov St Petersburg State Conservatory (class of Sergei Alexashkin).

In 2005–2007 the singer was a soloist with the St Petersburg Chamber Opera, in 2011–2012 he was with the Opera and Ballet Theatre of the St Petersburg Conservatory, in 2013–2014 he was with the New Israeli Opera (Tel Aviv), and in 2014–2015 he was with the Komische Oper Berlin. Since 2017 Yakov has been a soloist with the St Petersburg State Musical Theatre for Children Zazerkalye. There he has performed the roles of Vasily Sobakin (The Tsar’s Bride), King René (Iolanta), Prince Gremin (Eugene Onegin), Lindorf, Coppélius, Dr Miracle and Dapertutto (Les Contes d’Hoffmann), Don Alfonso (Così fan tutte), Don Bartolo (Le nozze di Figaro), Colline (La Bohème), Mustafà (L’italiana in Algeri), the Commissar and Bonze (Madama Butterfly), Zuniga (Carmen), Crown (Porgy and Bess), Lodovico (Verdi’s Otello), Dulcamara (L’elisir d’amore) and Geronimo (Il matrimonio segreto).

In 2007 in Ireland and Norway the artist has sung the part of the Priest in the world premiere of Shostakovich’s opera The Tale of the Priest and His Worker, Balda. Has appeared at the Mikhailovsky Theatre, the Grand Hall of the St Petersburg Philharmonia, the Jerusalem Theatre, the Auditorium concert hall in Haifa, the Richard B. Fisher Center for the Performing Arts (Bard College, New York State) and the Karelian State Philharmonic (Petrozavodsk). In 2008 the singer took part in the Gergiev Festival in Rotterdam.

Since 2017 he has also been a soloist with the St Petersburg Concert. Has collaborated with such conductors as Valery Gergiev, Mariss Jansons, Frédéric Chaslin, Sergei Stadler, Andrei Petrenko, Pavel Bubelnikov, Anatoly Rybalko, Arkady Steinlucht, Leon Botstein and Dan Ettinger.

At the Mariinsky Theatre Yakov Strizhak made his debut in 2008, appearing in the world premiere of Alexander Smelkov’s opera The Brothers Karamazov.

Has sung in the premiere of a new Mariinsky Theatre production of The Love for Three Oranges (2022, 1991 production revival).