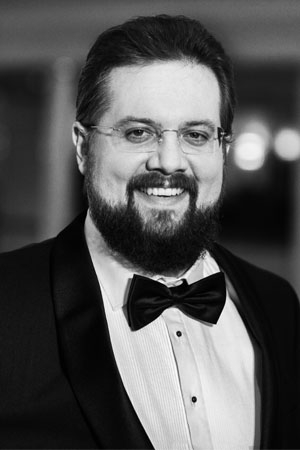 Stanislav Trofimov was born in Sterlitamak (Bashkiria). Graduated from the Orenburg State Institute of Arts named after L. and M. Rostropovich. From 2006 to 2007 he was a soloist with the Orenburg Municipal Chamber Choir and a grant recipient of Governor of Orenburg Region. Stanislav Trofimov began his operatic career the Glinka Chelyabinsk State Academic Opera and Ballet Theatre in 2008, he then very quickly moved on to perform the leading bass roles at the Yekaterinburg State Academic Opera and Ballet Theatre where he was a soloist from 2014 to 2016. In 2013 the singer took part in the gala concert The Bolshoi Young Voices on the Historic Stage of the Bolshoi Theatre of Russia. In 2014 he appeared as Pimen (Boris Godunov) and the Archbishop (The Maid of Orleans).

In 2015 Stanislav Trofimov made his debut at the Mariinsky Theatre as Pimen in Andrei Tarkovsky’s production of Boris Godunov. Since 2016 he has been a member of the Mariinsky Opera Company.

Has sung in the premieres of new Mariinsky Theatre productions of Les Contes d’Hoffmann and Benvenuto Cellini (2021).

Stanislav Trofimov is a guest soloist of the Bolshoi Theatre of Russia where he appears as Boris Godunov and Pimen (Boris Godunov), Vasily Sobakin (The Tsar’s Bride), the Sea King and a Viking Merchant (Sadko), the Priest (Katerina Izmailova), Leporello (Dargomyzhsky’s The Stone Guest), the Archbishop (The Maid of Orleans) and Kochubei (Mazepa, concert performance).

He sung in the Salzburg Festival’s productions of Lady Macbeth of Mtsensk (2017) and The Queen of Spades (2018) and concert performance of Les Pêcheurs de perles (2018). The artist made his debut at the Arena di Verona Opera Festival as Zaccaria in Nabucco in 2017.

In 2022 Stanislav Trofimov was awarded the Golden Sofit, St Petersburg’s most prestigious theatre prize, for the roles of Lindorf, Coppélius, Dr Miracle and Dapertutto in a new Mariinsky Theatre production of Les Contes d’Hoffmann.