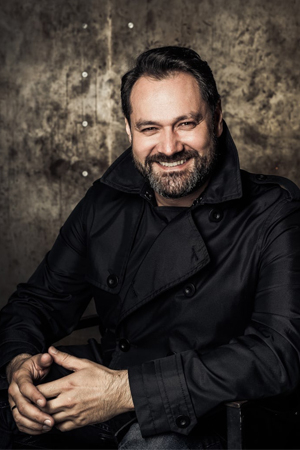 Ildar Abdrazakov was born and grew up in Ufa. In 1999 he graduated from the Ufa State Institute of Arts (class of Milyausha Murtazina). In 1997 he took part in the Irina Arkhipova TV competition Moscow Grand Prix, won the International Glinka Competition and was invited to join the Mariinsky Theatre. He made his Mariinsky Theatre debut in 1998 as Figaro (Le nozze di Figaro) and joined the opera company in 2000.

The singer’s win at the Maria Callas TV Competition in Italy made him a household name in Europe. At the age of twenty-five, in 2001 he made his debut at the Teatro alla Scala, since which time he has sung at some of the world’s greatest venues, among them the Metropolitan Opera, the Opéra national de Paris (including the part of Boris Godunov in the 2017–18 season), the Vienna State Opera, the Bayerische Staatsoper, the Royal Opera House (Covent Garden), the Opernhaus Zürich, the Teatro di San Carlo in Naples, the Gran Teatre del Liceu in Barcelona, Madrid’s Teatro Real and the Dutch National Opera in Amsterdam in addition to making regular appearances at the Salzburg Festival. In 2016 he made his debut at the Bolshoi Theatre of Russia in the role of Filippo II (Don Carlo).

Ildar Abdrazakov began his international career as a singer of the bel canto repertoire, frequently appearing at the Rossini Opera Festival in Pesaro. Today the singer’s repertoire includes roles in operas by Verdi, Gounod, Offenbach and Berlioz. In the Russian repertoire Abdrazakov has appeared as Dosifei in Khovanshchina, Igor Svyatoslavich in Prince Igor, Boris Godunov in the eponymous opera.
Thanks to Ildar Abdrazakov, the Mariinsky Theatre’s repertoire has been enriched by such rarely performed Verdian operas as Attila (2010) and I vespri siciliani (2017). The singer’s work in the Mariinsky Theatre’s production of Les Contes d’Hoffmann resulted in him receiving Russia’s Golden Mask National Theatre Award (2013).

The singer’s awards include the Oscar della Lirica, presented in 2012 for the role of Attila. The recording of Verdi’s Requiem featuring Abdrazakov, by the Chicago Symphony Orchestra under Riccardo Muti, received two GRAMMY awards in 2010.
In the spring of 2017 the singer concluded an exclusive recording contract with Deutsche Grammophon.
Since 2015 Ildar Abdrazakov has directed the Elena Obraztsova International Academy of Music in St Petersburg.

In 2016 he established the Ildar Abdrazakov Foundation for the support of talented young musicians, which runs the Ildar Abdrazakov International Music Festival and hosts series of masterclasses in vocals.
In 2019 with the Deutsche Grammophon label the singer released the solo album Verdi featuring arias from Verdian operas which was recorded together with the Orchestre Métropolitain de Montréal under Yannick Nézet-Séguin and which also featured Rolando Villazón.
Also in 2019 he made his debut as an opera director when he staged Attila at the Bashkir State Opera and Ballet Theatre; in March 2020 that production was performed at the Bolshoi Theatre of Russia.