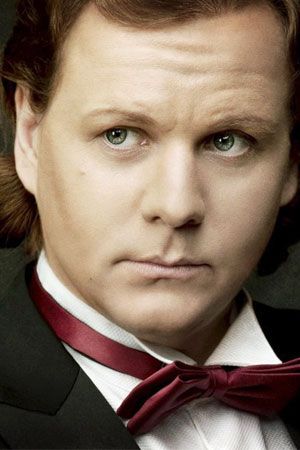 Alexey Markov was born in Vyborg in 1977. Graduated from a music school (guitar class) and the Vyborg Technical College of Civil Aviation, has played the trumpet in a jazz orchestra. At the age of twenty-two he began to sing at St Elijah’s Church in Vyborg. Subsequently Alexey took singing lessons from Alexander Dedik, and in 2001 he entered the Mariinsky Academy of Young Opera Singers where he studied under Georgy Zastavny.

Since 2005 Alexey Markov has been a soloist at the Mariinsky Theatre where he performs lead roles from the baritone repertoire. He made his debut at the theatre in 2003, appearing as a Wigmaker in Ariadne auf Naxos. In 2009 the singer was a recipient of Russia’s Golden Mask National Theatre Award for the role of Ivan in Alexander Smelkov’s opera The Brothers Karamazov. That same year he was awarded the Golden Sofit, St Petersburg’s most prestigious theatre prize, for the role of Robert in Iolanta.

In 2007 Alexey Markov made his debut at the Metropolitan Opera, performing the role of Andrei Bolkonsky in War and Peace (production by Andrei Konchalovsky). In 2011 he made his first appearance in Salzburg, followed by the Bayerische Staatsoper in 2013, the Bolshoi Theatre of Russia in 2017 and the Royal Opera House (Covent Garden) in 2018.