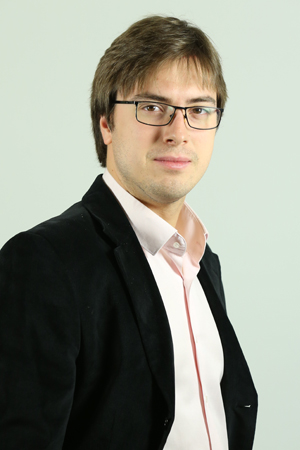 Vasily Popov was born in Leningrad. In 2011 he graduated from the Piano Faculty of the Rimsky-Korsakov St Petersburg State Conservatory (class of Ekaterina Murina).

Since 2010 he has been an accompanist at the Mariinsky Academy of Young Opera Singers.

With the academy’s soloists he has worked on rehearsals of the operas La sonnambula, Anna Bolena, La traviata, Les Pêcheurs de perles, Ariadne auf Naxos, Eugene Onegin, Kashchey the Immortal, Rachmaninoff’s Francesca da Rimini, Into the Storm, Colas Breugnon and Weinberg’s The Idiot among others.

From 2015 to 2019 he regularly appeared as an accompanist in the theatre’s chamber venues, also presenting concert programmes with opera soloists. The pianist’s repertoire includes Rebikov’s Christmas Tree, Prokofiev’s Maddalena and The Giant, Shostakovich’s Orango, Britten’s The Little Sweep, Butsko’s White Nights and Tariverdiev’s Expectation. Has performed at such premieres as  An Opera About Porridge, a Cat and Milk and Scenes from the Life of Nikolenka Irteniev by Banevich, Anna, Zinaida and The Little Prince by Klinichev. As part of the anniversary Year of Musorgsky – held in the 2014–15 season – together with soloists from the Academy of Young Opera Singers he gave a series of chamber music concerts featuring that composer’s complete works for voice. Has participated in the concert series All Rimsky-Korsakov Romances and All Tchaikovsky Romances. Has produced recordings for the programme Legendary Singers of the Imperial Theatres on Radio Orpheus.

Has participated in concerts and festivals held in Finland, Italy, Great Britain and Austria.