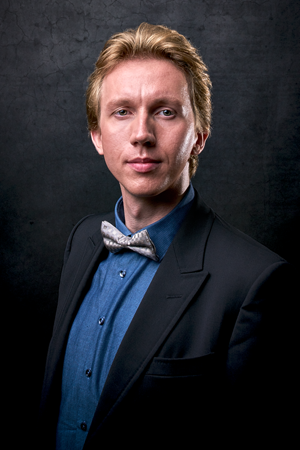 Born in Rostov-on-Don, Kokko graduated from the Piano Department of the Rostov-on-Don State Rachmaninoff Conservatoire (class of Professor Rimma Skorokhodova, Honoured Artist of Russia). He began as an accompanist in Rostov, at vocal classes of the arts college and the Conservatoire and at the Rostov State Musical Theatre, where he took part in productions of Tchaikovsky’s Eugene Onegin, Verdi’s La traviata, Taneyev’s Oresteia, and in preparation of performances of Mozart’s Great Mass in C minor and Bach’s Christmas Oratorio.

Kokko has been accompanist of the Mariinsky Academy of Young Opera Singers since 2016. There he has helped prepare concert performances of many Russian and international operas of classical and modern repertoire: Dargomyzhsky’s The Stone Guest, Bellini’s I Capuleti e i Montecchi and Il pirata, Massenet’s Cendrillon, Werther, and Cléopâtre, Bizet’s Les pêcheurs de perles, Lalo’s Le roi d'Ys and many others.

In 2017, Kokko and Olga Ovsyannikova, a teacher at the Mariinsky Academy, translated and prepared piano score of Gluck’s La rencontre imprévue, ou Les pèlerins de la Mecque to be staged at the Mariinsky Theatre’s branch in Vladikavkaz.

As a pianist and accompanist, he has appeared at the Theatre’s chamber venues (soirée performances of chamber vocal works at the Mussorgsky Hall, chamber operas and productions for children at the Prokofiev Hall). Kokko has performed Shostakovich’s The Silly Little Mouse, Britten’s The Little Sweep, Leonid Klinichev’s Zinaida, Svetlana Nesterova’s The Treasures of the Magic Well, Gladkov’s Town Musicians of Bremen, operas for children such as Rustam Sagdiev’s The Turnip (special prize Best Opera for Children at the 2017 Onegin National Opera Awards) and The Adventures of Kintaro (first performer, premiered in February 2018).

He has also taken part in master-classes of many singers and conductors. As an accompanist of choral scenes, Kokko has collaborated with maestro Leon Botstein on Taneyev’s Oresteia (the Stars of the White Nights festival, 2017) and with maestro Vincent de Kort on Mozart’s La clemenza di Tito (2018). Prize-winner at various international competitions, including the 3rd Röstäm Yaxin International Competition for Chamber Singers & Accompanists (2011, 2nd prize and special diploma For Best Performance of Rachmaninoff’s Romance). Kokko has toured in Vladikavkaz as part of the International Caucasus Festival The Mariinsky – Vladikavkaz (2018) and in other cities and towns.