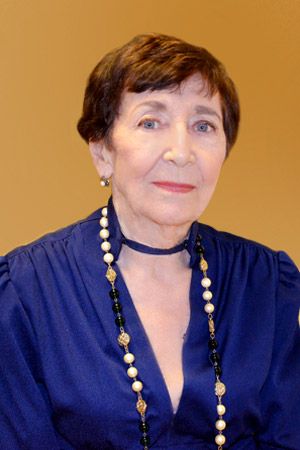 Elena Matusovskaya graduated from the Leningrad Rimsky-Korsakov Conservatoire (class of Nathan Perelman). In 1957 she joined the Maly Theatre of Opera and Ballet (today the Mikhailovsky Theatre), and since 1989 she has been with the Kirov (now the Mariinsky) Theatre.
She has taken part in the preparation of many Mariinsky Theatre productions, among them Le nozze di Figaro, Die Zauberflöte, Les Contes d’Hoffmann, Boris Godunov, Jenůfa, Otello, La Bohème and The Maid of Pskov.
She has worked with singers including Yevgenia Tselovalnik, Tatiana Novikova, Elena Ustinova, Nina Romanova, Yuri Marusin, Marianna Tarasova, Marina Shaguch, Zlata Bulycheva, Lyubov Sokolova, Yevgeny Akimov and Anna Netrebko. Enjoys great success in her collaboration with young opera soloists such as Irina Mataeva, Sergei Skorokhodov, Vladislav Sulimsky, Zhanna Dombrovskaya and Yevgeny Ulanov, Violetta Lukyanenko and Natalya Pavlova among others.
In 2007 she was involved in a recording of the CD Souvenirs for Deutsche Grammophon together with Anna Netrebko.
Elena Matusovskaya has a packed recital schedule, partnering many opera soloists and touring throughout Russia and abroad. Elena Matusovskaya also performs at the annual charitable concerts Masters of the Arts to Veterans of the Stage run by the Teatral society of theatre lovers. In 2003, Teatral awarded her its Audience Favourite prize, and in 2005 the Ministry of Culture expressed its gratitude for her many years of hard work and tremendous contribution to the development of Russian culture.